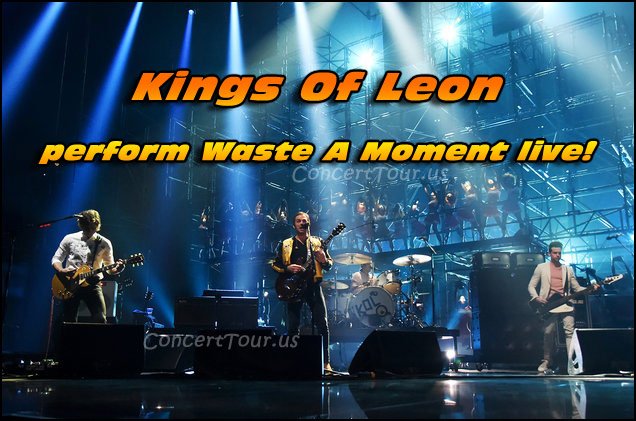 If you had the chance to watch the 2016 MTV EMAs (Europe Music Awards) the other night, then I hope you did not miss the awesome performance put on by Kings Of Leon with their new song ‘Waste a Moment‘. Don’t worry if you missed it though, we have a video of it just below. Kings Of Leon also performed the same song live a few weeks before at the BBC Radio 1 Live Lounge, which we also have the video for below. The song is actually quite catchy and has been getting great positive feedback since it’s debut. You can watch both of the videos if you scroll down below.

Presently, the band Kings Of Leon are on their WALLS tour, and if you are lucky enough, maybe you can catch them live at a venue near you. Their most recent studio album WALLS was released on October 14th, 2016. The title WALLS actually stands for ‘We Are Like Love Songs‘ and is their newest albums since Mechanical Bull back in 2013. The WALLS album actually debuted at the Number 1 spot on the Billboard 200 music chart and had quite a decent number of sales upon its release.

Don’t forget, scroll down to check out the Kings Of Leon videos and also visit our Kings Of Leon tour page for the latest info on their present tour.


(Here they are performing the same song, in HD, in the BBC Radio 1 Live Lounge a few weeks before)
VIDEO – Kings Of Leon – Waste A Moment in the Live Lounge