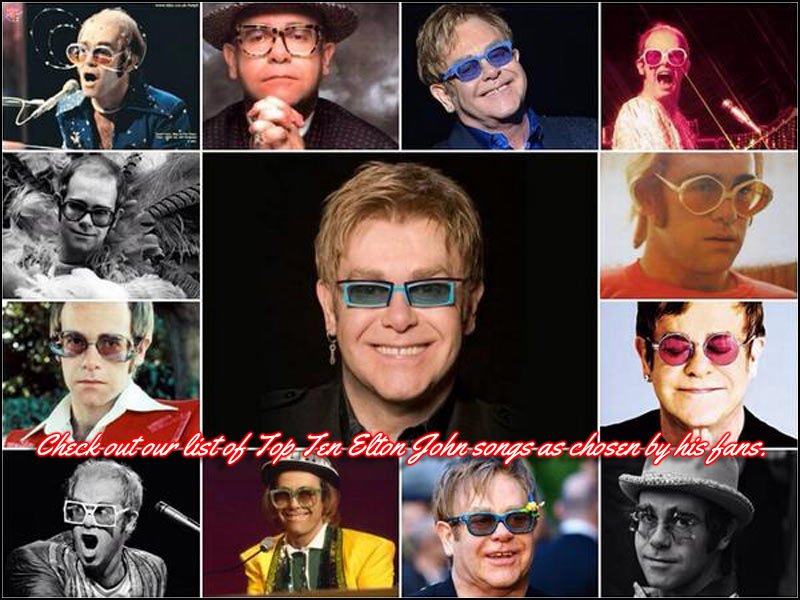 Taken from one of our Elton John event pages on Facebook, we asked a poll of what his fans thought was their favorite song(s) from Elton John and as of writing this, we have the results below. While over 40 songs were given as answers, we are listing the Top Ten that made it onto the list. We provided about 20 of the songs to choose from, and we let the fans add their own, which grew the list to over 40 songs. While you may disagree with some of the listed songs, we think it’s pretty accurate. There’s a spot below to leave comments, so if you agree, or disagree, feel free to comment. Just so you know, Elton John has put out over 30 studio albums during his musical career, which began way back in 1962. His music over the years has fallen into multiple categories, including Rock, pop rock, soft rock and rhythm and blues. Elton John can sing, play piano, keyboards and guitar. He was born in 1947 and was given the full name of Reginald Kenneth Dwight. He is presently on a 3 year farewell tour which is named the ‘Farewell Yellow Brick Road Tour‘. Here are the poll results of the Top Ten Elton John Songs, as chosen by fans on one of our Elton John event pages on the social networking website Facebook.

Check our our list of Top Ten Elton John songs of all time. You can Comment below whether you agree or not.

“Daniel” is a song and ballad by Elton John. It appeared on the 1973 album Don’t Shoot Me I’m Only the Piano Player. It was written by John and his lyricist Bernie Taupin.

“I’m Still Standing” is a song by British rock musician Elton John, from his Platinum-certified 1983 album, Too Low for Zero. John said this was “my reaction to still being relevant and successful in the early 1980s.”

“Candle in the Wind” is a threnody with music and lyrics by Elton John and Bernie Taupin. It was originally written in 1973, in honour of Marilyn Monroe, who had died 11 years earlier.

“Goodbye Yellow Brick Road” is a ballad performed by musician Elton John. Lyrics for the song were written by Bernie Taupin and the music composed by John for his album Goodbye Yellow Brick Road. Its musical style and production was heavily influenced by 1970s soft rock. It was widely praised by critics, and some critics have named it John’s best song.

“Your Song” is a song composed and performed by English musician Elton John with lyrics by his longtime collaborator, Bernie Taupin. It originally appeared on John’s self-titled second studio album (which was released in 1970).

“Bennie and the Jets” (also titled as “Benny & the Jets”) is a song composed by Elton John and Bernie Taupin. The song first appeared on the Goodbye Yellow Brick Road album in 1973. “Bennie and the Jets” has been one of John’s most popular songs and was performed during John’s appearance at Live Aid.

4 – I Guess That’s Why They Call It The Blues

“I Guess That’s Why They Call It the Blues” is a song by English singer Elton John, with music by John and Davey Johnstone and lyrics by Bernie Taupin . In the US, it became one of John’s biggest hits of the 1980s, holding at #2 for four weeks on the Adult Contemporary chart, and reaching #4 on the Billboard Hot 100. The song features Stevie Wonder on harmonica. The song received largely favorable reviews, with Bill Janovitz of AllMusic declaring the song “likely to stand the test of time as a standard.”

“Rocket Man” (officially titled “Rocket Man (I Think It’s Going to Be a Long, Long Time)”) is a song composed by Elton John and Bernie Taupin and originally performed by John. The song first appeared on John’s 1972 album Honky Château and became a hit single, rising to No. 2 in the UK and No. 6 in the US. On October 5, 2018, the song was certified Gold by the British Phonographic Industry for sales of 400,000 digital downloads.

“Don’t Let the Sun Go Down on Me” is a song written by English singer Elton John and his lyricist Bernie Taupin. It was originally recorded in 1974 by Elton John for his studio album Caribou and was released as a single that peaked at number two on the Billboard Hot 100 chart and reached number 16 on the UK Singles Chart. The song found further success in 1991 in a live cover version recorded as a duet between John and George Michael, which reached number one in the UK and US.

“Tiny Dancer” is a song by Elton John with lyrics by Bernie Taupin. It appears on John’s fourth album, Madman Across the Water, and was released as a single in 1972. In the U.S. it was certified Gold on 19 May 2005, and Platinum on 19 August 2011, and 3x Platinum on April 26, 2018, by the Recording Industry Association of America. In the UK, “Tiny Dancer” has been certified Gold on August 17, 2018, by the British Phonographic Industry (BPI) for sales of 400,000 copies, despite never being released as an official single. Back-up vocals are provided by Tony Burrows.