Reasons why I am a fan of the band KISS 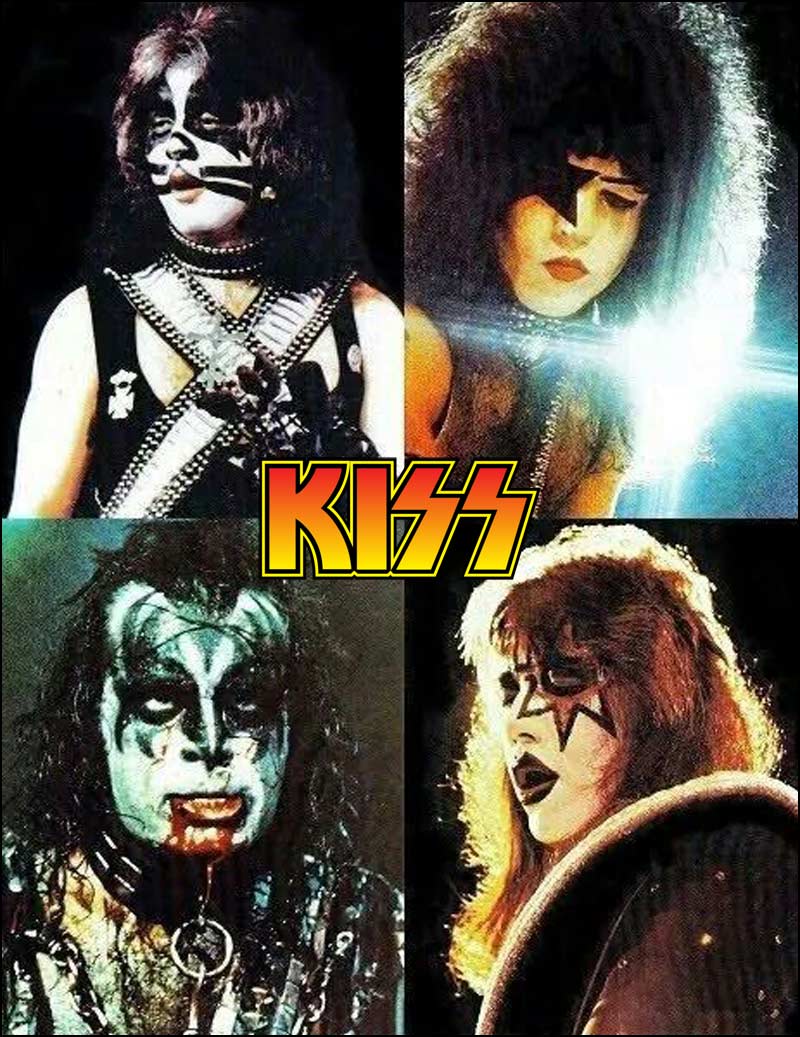 First off, I have to mention that I am really a fan of the ORIGINAL line up of the rock band KISS. I was quite young back in the late 1970s, and music wise I usually followed what my slightly older sister liked. She wasn’t into heavy rock, but definitely what we now call Classic Rock. Queen, The Talking Heads, Fleetwood Mac, Steve Miller Band, Bob Seger, Pink Floyd and more along those lines. Then one day she was listening to something that was different. The music was louder and harder than the just mentioned bands. I looked at a few album covers that she had out and I instantly thought they were so cool. Here are these people (I did not know then that they were all guys/men) in wildly cool, what appeared to be, leather studded outfits, with shiny diamond like studs and spikes on them. Then the even cooler make-up they had on their faces. One guy had a Star on one eye, another one had what appeared to be bat wings covering each side of his face, one looked like a cat with whiskers and a shiny nose, and the last had silver star like shapes around each eye. I came to learn that their band member names were The Demon, The Starchild, The Cat, and The Spaceman (or aka Space Ace). In the same order were their real names, Gene Simmons, Paul Stanley, Peter Criss and Ace Frehley. There was one album where the members appeared to be playing live on stage and they were in full costume with smoke all around them and there name in lights, ‘KISS’. On the back of another album were close-ups of their faces and The Demon had blood pouring out of his mouth. Man were these guys cool! Then there was their actual music. Heavy, yet melodic. Easy to bob head head up and down to. Cool lyrics which back then I didn’t know that many of their lyrics were sexually oriented. I would listen to them every time my sister did, and I would also ‘borrow’ her vinyl records to listen to them myself. KISS, Hotter Than Hell, KISS ALIVE, Destroyer, Rock And Roll Over, Love Gun, Dressed To Kill, Alive II, all got me so hooked on them. I joined their KISS Army fan club for a few dollars and began to receive high glossy picture books of them and other cool memorabilia. This band was every young persons dream come true. I felt like a rebel listening to them, and pretending to be them with my friends. We had fake instruments and made our own (cheesy) makeup. We tried our own fake blood and would act out wildly performing as we played their records.

I followed the band for several years and bought everything they offered. Their records, their fan club merchandise. Dolls, posters, buttons, belt buckles, you name it, I bought it. Although the love affair for me ended about the time when their album Dynasty came out. To me, it was as if they were selling out to a more ‘disco-ee’ sound. To me they lost their ‘hard’ sound and edge. I still followed them, but not as devout as before. A little later on when 2 of the original members left the band (Ace Frehley and Peter Criss), I completely lost all interest, although I would peak my head in once in a while to see what they were up to. None of their music after that point matched up to their original 7 or 8 albums, although they did have a good song out here and there. KISS always reminded me of my childhood and always brought back great memories of me and my sister, me and my childhood friends, but the appeal for me had gone.

Fast forward to today, and the band just announced what is supposedly their final tour ever. They have called it the End of the Road World Tour, and while it makes me sad to hear it, it is kind of about time. I can’t see them being able to continue to produce new music after so many years of cranking out new tunes. I am not knocking them, I think any band would have ‘puttered out’ by now. I probably will see one of their concerts in this last trek of theirs, although they still are not back with the original line-up. I’m sure though that all their event dates will sell out due to the fact that they still have a huge following. Al I can say now is so long KISS, it’s been a heck of a ride. Thanks for all they great memories and I wish you all the best.

Here’s a great picture of KISS with their original line up. How could ANY kid not fall in love with this??