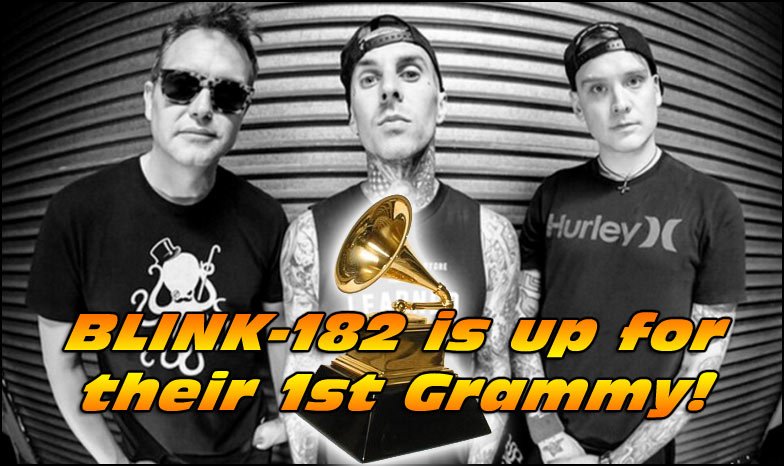 Both Mark Hoppus and Travis Barker (2 of the 3 members of Blink-182) are still in awe that they’ve been nominated for their first Grammy award ever. Back in the middle of July 2016, the band released their most recent studio release called California. California set a couple of landmarks for the band; It was their 7th record under the band name, and Matt Skiba took over and filled the shoes of previous band member Tom DeLonge. Their new music does sound different than it did with DeLonge, but they still sound great and fans took to the new music immediately.

As of the upcoming 2017 Grammy Awards, Blink-182 was nominated for Best Rock Album and are up against some tough competition. I guess we just have to wait and see who actually wins. “It is a great feeling to be nominated for a Grammy. It’s something I never envisioned was even possible and to have that happen at the end of this year is a huge honor, so gratifying, so amazing,” Mark said in his interview with Billboard. “It’s unbelievable,” Travis said. “It’s not even something we could have ever even dreamed of. Years ago I was very OK with just being able to play the Grammys along with other artists. Then for this to happen, for the band I’ve played in for almost the last 20 years to get nominated, just being nominated I feel like we’ve won, it doesn’t matter if we win. It’s just awesome.”. Travis Barker is not new to the scene of drumming at the Grammys, over a few years, he’s played drums for other performers such as Eminem, Drake, Pitbull, Joe Perry, Robin Thicke and Lil Wayne.

As of this writing, there is no definitely 2017 tour set for Blink-182 (other than a handful of international dates in Germany, Italy, the UK, … ), but we have a strange feeling that may change soon. Check out our Blink-182 Tour page to see what the latest word on the street is.

Blink-182 is up for their 1st Grammy Award ever! Let’s hope they win!