P!NK Announces A Live Performance Appearance at Summerfest at The Marcus Amphitheater in Milwaukee 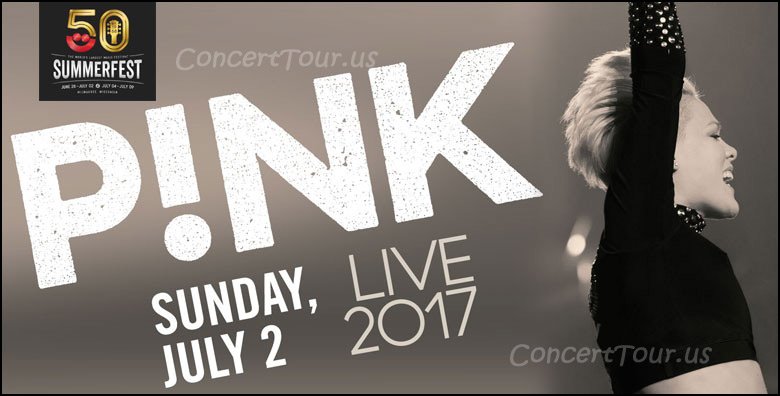 Sunday July 2nd 2017 will be a big day for fans of the musician PINK (aka P!NK). Even though she’s presently pregnant with her 2nd child, PINK will be doing performances in 2017. In fact according to her husband, Carey Hart, PINK will supposedly be announcing some sort of tour for herself in 2017. I’m sure though that it will be set for well past the baby’s due date. This appearance at Summerfest is celebrating its 50th Summerfest taking place. The event is dubbed as ‘The World’s Largest Music Festival’ and will span multiple dates and spotlight many musicians and bands. There’s something like 1,000+ performances, over 800 acts, 11 days of entertainment. Even the Red Hot Chili Peppers will be one of the headliners.

This will be some set of shows, We would recommend getting hold of tickets as soon as you can. Just the fact that PINK will be performing is enough to sell the whole thing out, and there’s hundreds of other performers, so I would get cracking on finding tickets (look below).

You can also check out our Facebook Event Page for PINK’s performance at Summerfest.

Don’t miss this great opportunity to see P!NK (PINK) live in concert along with a ton of other performers!