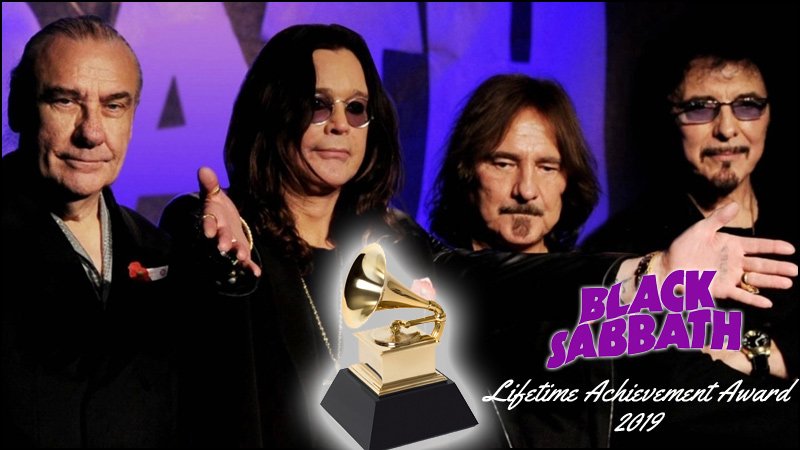 Heavy metal iconic band Black Sabbath is set to receive the Lifetime Achievement Award at the upcoming 2019 Grammy Awards show. The band, which a founded back in 1968, has definitely left an ever lasting impression on millions of music fans. The band was formed in Birmingham, England and consisted originally of vocalist Ozzy Osbourne, guitarist (and main song writer) Tommy Iommi, bassist Geezer Butler (who also was their lead lyricist), and drummer Bill Ward. The band shocked the music world with their heavy, melodic sound, gaining tons of fans along the way. Unfortunately, due to his drug and alcohol use, Ozzy was eventually was booted from the band and replaced by singer DIO (Ronnie James Dio) in 1979 and the band put out two albums with their new singer. The band changed singers for a while, including Tony Martin, Ian Gillan, Ray Gillen and Glenn Hughes. The band also changed their drummer and bassist on multiple occasions. The original line-up reunited with Ozzy Osbourne back in 1997 and they released ‘Reunion’ which was a live album. Black Sabbath’s final studio album (and nineteenth overall), simply named 13 (2013), features all of the original members except drummer Bill Ward, who split from the band prior to the recording sessions because of a contract dispute. Even though the band will be receiving this Lifetime Achievement Award at the Grammys of 2019, it has not been confirmed whether or not the band will be present to accept it. And if they do show up, the next question will be, will Bill Ward be present with them. Until further notice, or the actual event itself, we’ll all just have to wonder and wait.

Black Sabbath is set to receive the Lifetime Achievement Award at the 2019 Grammy Awards Show.