Benito Antonio Martínez Ocasio, who is better known to his fans as “Bad Bunny,” is a young urban and trap music singer- songwriter. Hailing from Puerto Rico, this young, talented artist has been surrounded by music since the day he was born, which led him to have a passion for the art from a very young age. With a short but amazing career, Bad Bunny has experienced amazing levels of success, with his music not only being heard in his native Puerto Rico or in Latin America, but also throughout the United States and Europe. Currently, Bad Bunny has billions of views on YouTube and an overwhelming number of visits on other digital music platforms such as Spotify, Apple Music, Tidal and Pandora, which labels him as one of the top Latin urban artists of the moment and one of the pioneers of the Latin Trap movement.

Later in the 2022 year, in late summer, Bad Bunny will embark on his first ever Stadium Tour. It’s being dubbed as the World’s Hottest Tour and it will bring Bad Bunny to a huge stadium near you. …. The 2022 year looks to be a huge one for concerts. It’s been way too long for everyone because we’ve all been ‘stuck home’ for the past year and a half. But good news is here, and entertainer Bad Bunny is a big part of it! in 2022, Bad Bunny will be on his ‘El Ultimo Tour Del Mundo 2022’. So far in North America he has about 40 dates planned. A couple of the shows take place up in Canada, the rest have him making his way across the United States of America. His 2022 tour begins on February 9th in Denver Colorado at Ball Arena. Bad Bunny will be performing, sometimes multiple nights, in cities including Denver, El Paso, Houston, Dallas, Miami, Los Angeles, Seattle, Portland, San Diego, Las Vegas, San Jose, Orlando, Atlanta and more. As of the writing of this, his tour in North America ends on April 3rd, which will be the third night in a row that he performs at AmericanAirlines Arena in Miami, Florida.

Look below for all the latest official Bad Bunny tour dates, links to look for tickets, plus some fan favorite Bad Bunny music videos. 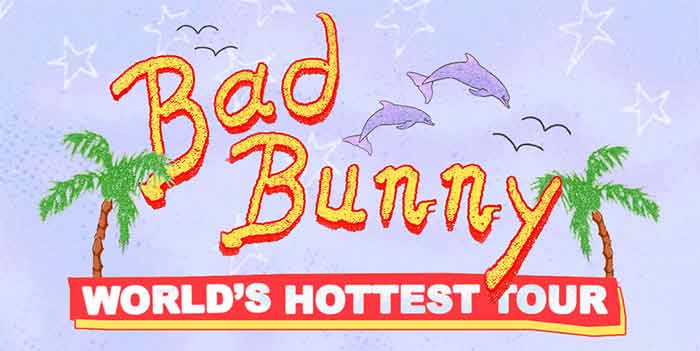 Bad Bunny will embark on his first ever Stadium Tour beginning in late summer of 2022.

Check back to see if Bad Bunny adds any additional tour dates to his 2022 trek.