It’s been a few years since we’ve seen country music mega-star Blake Shelton out on the road on tour but that drought is just about over now that Blake Shelton has announced his tour plans for 2023. Beginning in February of 2023, the Back To The Honky Tonk Tour will be on the road and headed to a venue near you. Performing with Blake Shelton on stage are special guests Carly Pearce and Jackson Dean. As of the writing of this, there’s only about 18 tour dates scheduled but we have a feeling that the Blake Shelton tour 2023 will have more dates added to it. The tour is set to hit the first stage on February 16th in Lincoln, Nebraska at the Pinnacle Bank Arena. Other cities on the trek list include Orlando, Columbus, Jacksonville, Indianapolis, Oklahoma City, Kansas City, Buffalo, Pittsburgh, Cincinnati, Louisville, North Little Rock, Tampa, Knoxville, Greensboro and more. Without any extension, the tour is set to end on March 25th on the stage of KeyBank Center up in Buffalo, New York. If you’re a fan but don’t see any shows listed near you, just have faith that more shows will be added to the present Blake Shelton tour.


Check down below for the latest official list of Blake Shelton tour dates. You’ll also find links to look for tickets, and a playlist of some of Blake Shelton’s more popular music videos. 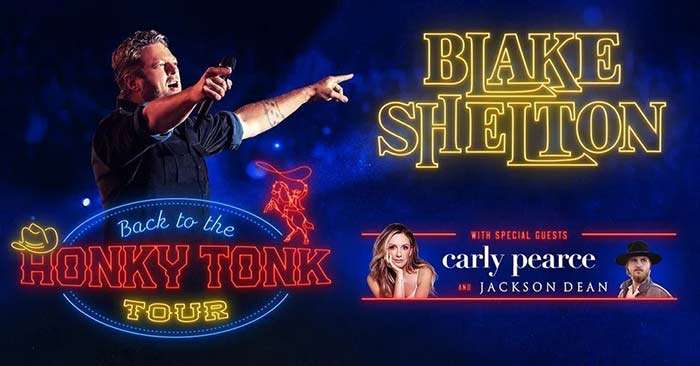 Blake Shelton prepares for his 2023 concert tour with Carly Pearce and Jackson Dean.

There’s a good chance that this Blake Shelton Tour 2023 will be extended with additional tour dates. Check here often as we will keep the above event lists updated with the most recent itinerary.