I keep saying this but only because it’s turning out to be true. Country music is going to rule the concert stages this 2022 year, there’s so many tours coming up that it’s hard to keep track. This time is another mega-star in country music, and her name is Bonnie Raitt. She really needs no introduction, she’s such an icon in the industry. Going on what is being called her Just Like That Tour 2022, Bonnie Raitt will be bringing with her several special guests who will alternate who goes on stage with her every night. For different parts of the huge Bonnie Raitt tour, being the special guest includes acts such as NRBQ, Maia Sharp, Lucinda Williams, Mavis Staples, and more to be announced. As Bonnie said in her statement about the upcoming tour “The band and I can’t wait to get back to what we’re meant to do — play live again! Hope to see you when we come through!”

The upcoming Bonnie Raitt tour 2022 is scheduled to be huge. As of right now, over 75 (seventy five) tour dates have been announced, which is a huge number of dates when it comes to a tour. The country music queen will be on the road from March 28th where she takes to the stage in Modesto, California, all the way through November 29th when her present last concert is set for in Clearwater, Florida. That’s 8 straight months of touring for the 72 year old singer and songwriter. If you didn’t realize it, Bonnie Raitt has been in the country music business since 1971, that’s 50 years and a serious accomplishment.

Check down below for the latest official list of Bonnie Raitt tour dates. You’ll also find links to look for tickets, and a playlist of some of Bonnie Raitt’s more popular music videos. 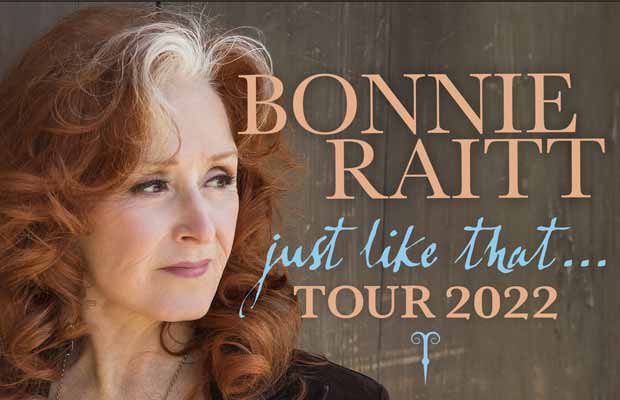 There’s a good chance that the Bonnie Rait Tour 2022 will be extended with additional tour dates. Check here often as we will keep the above event lists updated with the most recent itinerary.