Add another set of ‘must see’ concerts to the already huge list of upcoming 2022 concert tours. This time it’s the amazingly talented Jack Johnson that’s going back on the road and he’s got a pretty decent sized tour planned for North America which begins in the middle of the 2022 year. Jack Johnson is a singer / songwriter from the beautiful shores of the island of Hawaii. Most of his music is considered either acoustic pop or soft rock, and he’s got quite a strong following of fans. He’s known for hit songs such as Flake, Bubbles Toes, Taylor, Rodeo Clowns, Banana Pancakes, Breakdown, Belle, among many more. Since 2001, Jack Johnson has released 7 studio albums. All of which hit within the Top 50 on the Billboard Top 200 album chart. Three of his albums hit the Number 1 spot, one album hit as high as the Number 2 spot, he also has another one that landed in the Number 3 spot, and a Number 5 spot. Needless to say he’s a machine when it comes to cranking out music that just resonates with so many people. Special guests that will appear somewhere along the Jack Johnson tour include Ziggy Marley, Ben Harper, Durand Jones & The Indications, and more.

Check down below for the latest official list of Jack Johnson tour dates. You’ll also find links to look for tickets, and a playlist of some of Jack Johnson’s more popular music videos. 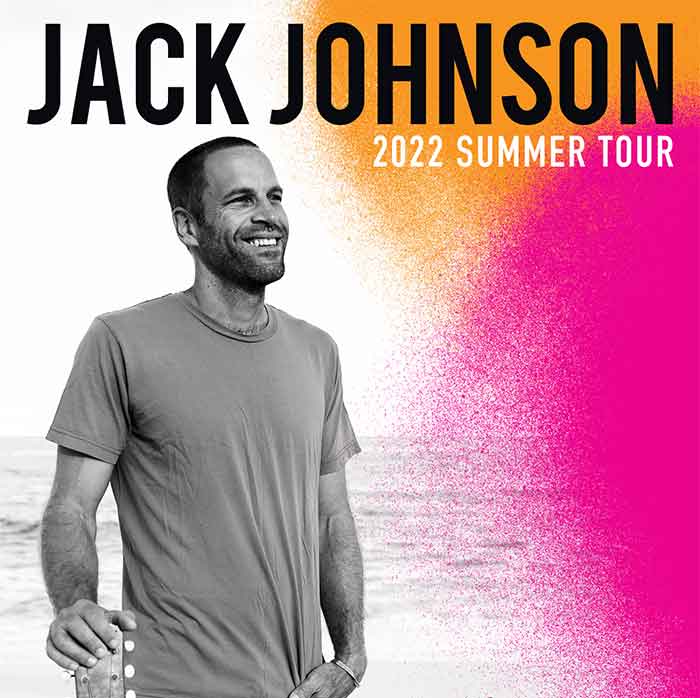 Don’t miss Jack Johnson when he’s on his 2022 Summer Tour.

There’s always a very good chance that the Jack Johnson tour 2022 will be extended with additional tour dates. Check here often because we will keep the above event lists updated.