NKOTB is Back and On Tour With Boyz II Men and Paula Abdul on their 2017 Total Package Tour :

Everybody’s favorite ‘boy band’ is back, although they are not really ‘boys’ any longer, but grown men but that doesn’t stop the girls and women from loving them. NKOTB has announced their 2017 tour plans and they will be on what they are calling The Total Package Tour with both Boyz II Men and Paula Abdul. This is no small concert tour as is it comprised of almost 50 shows and concerts that span across The U.S. and Canada. Some of the states that NKOTB will be performing in include Nevada, California, Arizona, Texas, Louisiana, Oklahoma, Missouri, Minneapolis, Illinois, Ohio, Michigan, Indianapolis, Pennsylvania, New York plus several others along with some stops way up North in Canada. NKOTB, or as they are better know as New Kids On The Block, is comprised of the following members of the group; Jordan Knight, Joey McIntyre, Jonathan Knight, Donnie Wahlberg and Danny Wood. At one point both Mark Wahlberg and Jamie Kelley were also part of the very successful music group. Look below for the latest NKOTB Tour Dates, links to their concert tickets and some pretty popular music videos and photos. 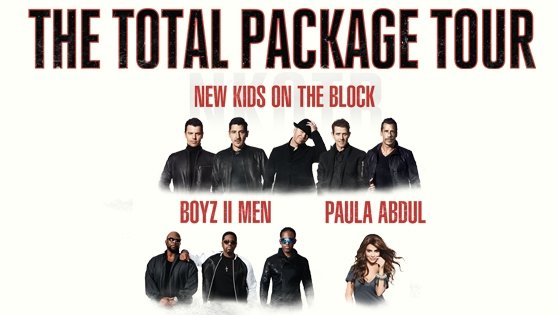 Check back regularly for added NKOTB tour dates as they are officially released.

NKOTB Prepares For Their ‘The Total Package Tour’

We hope all the New Kids On The Block fans enjoy this year’s NKOTB tour as they play live across North America!