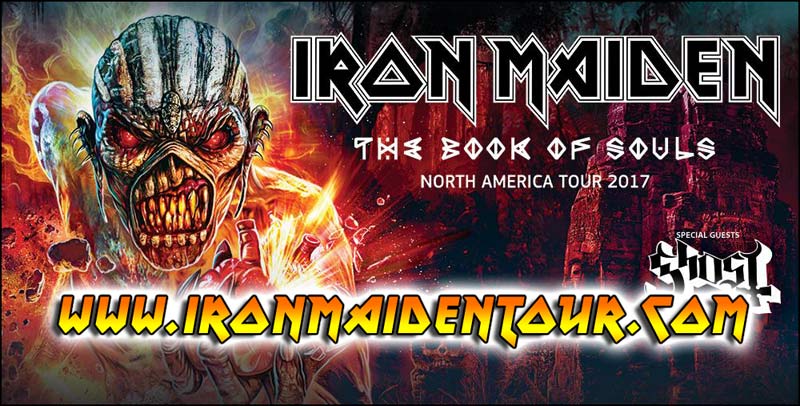 Last year alone was a big year for the metal band Iron Maiden. Not only had Bruce Dickinson recently been cleared of cancer, but their latest studio album, The Book of Souls, was released with huge fanfare. Bruce’s voice was as strong as ever and the band sounded tight and loud. Then Iron Maiden hit the road for their World Tour in support of The Book of Souls, and the live shows did NOT disappoint. You would guess that possibly Dickinson may not sound so good live, without computer enhancements, but if you thought that, you were wrong. Bruce Dickinson sounded as if he hasn’t lost a step and the band, as usual, was tight, loud and fast; Exactly what you want out of an Iron Maiden live show.

This year hopes to be no different for IRON MAIDEN as they continue their Book of Souls tour into 2017, and it doesn’t look like they are stopping. The tour will hit up North America in June, and the list of event cities includes Bristow, Philadelphia, Newark, Charlotte, Tampa, Nashville, Chicago, Houston, Dallas, Phoenix, Kansas City, Salt Lake City, Saint Louis, Las Vegas, Oakland, Minneapolis, San Bernadino, Brooklyn, multiple cities in Canada, plus even more.

We have our own IRON MAIDEN tour page set up (or you can visit www.IronMaidenTour.com), which will tell you their latest tour schedule, help you look for tickets, and more. If you’re and Iron Maiden fan, this is going to be another good year.

IRON MAIDEN will be on tour throughout 2017. Don’t miss them when they perform at a venue near you!