Timbiriche is a Mexican pop music group which was started as a children’s group in 1982 and managed to evolve successfully into adulthood. Timbiriche is considered one of the most iconic Latin Pop acts of the 1980s and the early 1990s, and guess what, they’re back!

The discography of the band consists of twelve studio albums released between 1982 and 1993, in addition to two compilation albums and two discs recorded live. Timbiriche has sold more than 15 million copies in Mexico and other Latin American territories, being considered one of the most popular Latin Pop bands of all time. They have met in three successful reunions. The first occurred in 1998, the second in 2007 celebrating twenty-five years since the foundation of the band and the third one in 2017, celebrated by a sold-out tour. This reunion is expected to start in September 2017 with an initial tour of 30 presentations. At the moment the official list of members of the reunion has not been confirmed, but it is rumored the presence of the seven original members of the band and possibly also special appearances of “La Chica Dorada” Paulina Rubio, Eduardo Capetillo, Thalía, Edith Márquez and Bibi Gaytán.

The band have also starred in a documentary called La Misma Piedra that followed step by step the band’s adventures in the preparation of the tours, concerts and behind the scenes of its 25th anniversary. In 2007, the Mexican TV/Media company Televisa also produced a reality show whose objective was to integrate a new lineup for the band. The band was also in a musical back in October 2007 which was based on Timbiriche’s songs. If you are hungry for some Latin pop music then go get your concert tickets now to see the 35th Reunion tour of Timbiriche. It will be one of the best concerts in 2018, and hopefully they will be adding more dates that extend into the 2019 year.

Check below for all the latest Timbiriche tour dates, links to look for tickets, plus a couple of their music videos. 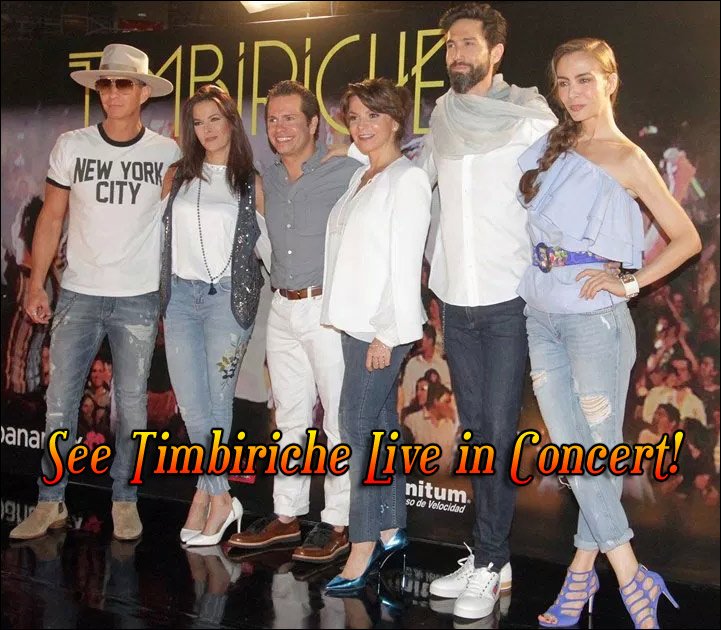 Timbiriche is back and will be on tour in celebration of their 35th Anniversary. Check them out at a venue near you.

Don’t forget to check back often as it is quite common for performers to add dates to their tour. In this case, we definitely hope so.