SLAYER will begin what is being referred to as “The Final Campaign”, which is the seventh and final part of their farewell world concert tour. This last big bash will begin at the ExploreAsheville Arena in Asheville, North Carolina, and continue on until it ends at the Los Angeles Forum on Saturday, November 30th. Joining SLAYER for this this part of their tour are the bands PRIMUS, MINISTRY and PHILIP H. ANSELMO & THE ILLEGALS performing a vulgar display of PANTERA, who will be present on all the show dates. A special pre-sale brought to you by the website BLABBERMOUTH.NET will start on Wednesday, July 10th at 10:00am and will finish up on Thursday, July 11th at 10:00pm. When prompted, type in the presale password “BLOOD” to grab your tickets before the general public. The onsale for the general public will start on Friday, July 12th at 10am. There will be a limited amount of VIP packages if you choose to go that route.

SLAYER’s final concert tour started back in 2018 and the band had said they were aiming at performing at as many places as possible. This would make it easy for the fans to see one last SLAYER show and to also say goodbye. When this whole 18-month tour finishes up on November 30th, the metal band will have finished seven tour legs, plus a good handful of major summer metal music festivals, performing over 140 shows in 30 countries and 40 US states.

Check below for all the latest Slayer tour dates, links to look for tickets, plus a couple of Slayer music videos. 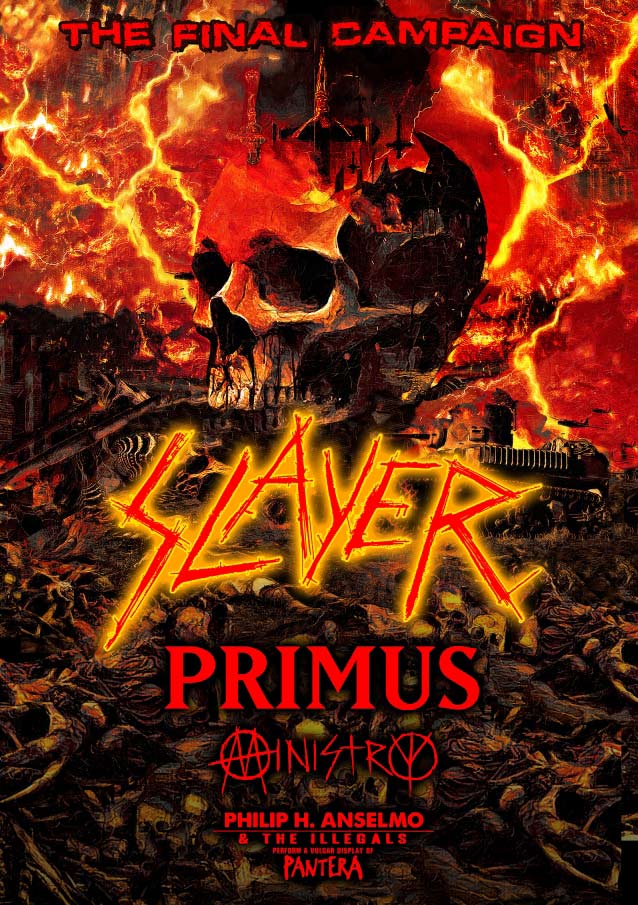 Slayer will be on the road with Primus and Ministry on their ‘Final Campaign’ world tour.

We know this is not a large list of North American tour dates for Slayer, but hopefully the band will add additional shows. Check back often to see if they extend their visits to U.S. venues.


SLAYER – You Against You (OFFICIAL MUSIC VIDEO)