Foo Fighters are celebrating their 25th anniversary by going on a ‘van tour‘ revisiting show stops along their 1995 tour. And the shows are all ‘In The Round’ so everyone in the crowd get’s a great view, no matter where your seats are. So far there’s only about 10 concerts planned. The anniversary trek is set to perform in Phoenix, Albuquerque, Oklahoma City, Wichita, Knoxville, Green Bay, Grand Rapids, Cincinnati, Cleveland and Hamilton Ontario up in Canada. Even though they are doing shows at venues that they did back in 1995, they won’t be driving the red Dodge van that they used to own. The band is just a tad more popular than then, LoL. Each date of the tour will feature and sneak peek of Dave Grohl’s new documentary called ‘What Drives Us’. Dave’s documentary is described in the tour paperwork as “a deep dive into what possesses a particular tribe of human beings to leave behind jobs, families, relationships and any semblance of sanity to climb into a busted-ass Econoline and take their music to the people – or at least a dozen or so of them here and there.” It will feature interviews with members of other van-tour veterans, including some huge names like Metallica and the Beatles. Keep an eye on the even lists below as the initial tour announcement only consists of 10 dates.

Check down below for the latest list of official Foo Fighter tour dates and links to look for tickets. There’s also a music video playlist of some of the more popular Foo Fighter songs. 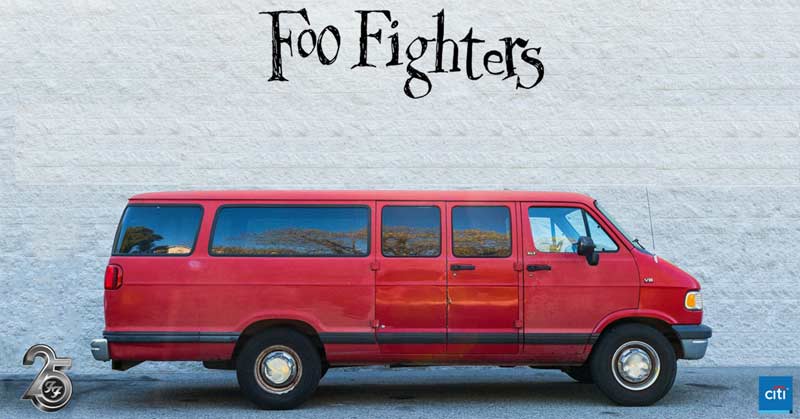 Don’t miss the Foo Fighters celebrate their 25th anniversary as they recreate their first van-tour ever from 1995.

That’s the big tour for now! I’d recommend to bookmark this page and check it regularly to see when the Foo Fighters add more dates to their 25th anniversary tour.

Written and Posted by Jason Mazer