The Knotfest Roadshow, brought to you by metal band Slipknot, will continue on the road in North America this 2022 year. Joining Slipknot on the trek are supporting bands In This Moment, Jinjer, Cypress Hill and Ho99o9. Not all Special Guests are performing every night. When Corey Taylor (singer of Slipknot) was asked about their Knotfest Roadshow, he responded “We set a precedent a couple of years ago – Knotfest is a showcase where you never know what to expect. This year is no exception. The bands we have represent all corners of our musical world, just like we do. And they’re exciting as hell. I can’t wait to watch and enjoy them along with the rest of the fans.”. Presently there’s about 20 concerts planned that stretch across the country, including a few shows up in Canada. The heavy metal trek takes off on March 16th in Fargo, North Dakota when the band hits the stage at Fargodome. The tour also stops in Boston, New York, Detroit, Nashville, Charlotte, Birmingham, Austin, Dallas, West Palm Beach, Orlando, Memphis and several more. Up in Canada, lucky cities include Quebec City, Montreal and Toronto.

Check out the full list of 2022 Slipknot tour dates found below. There’s also links for you to look for tickets, plus a music video playlist that contains over 100 Slipknot music videos. 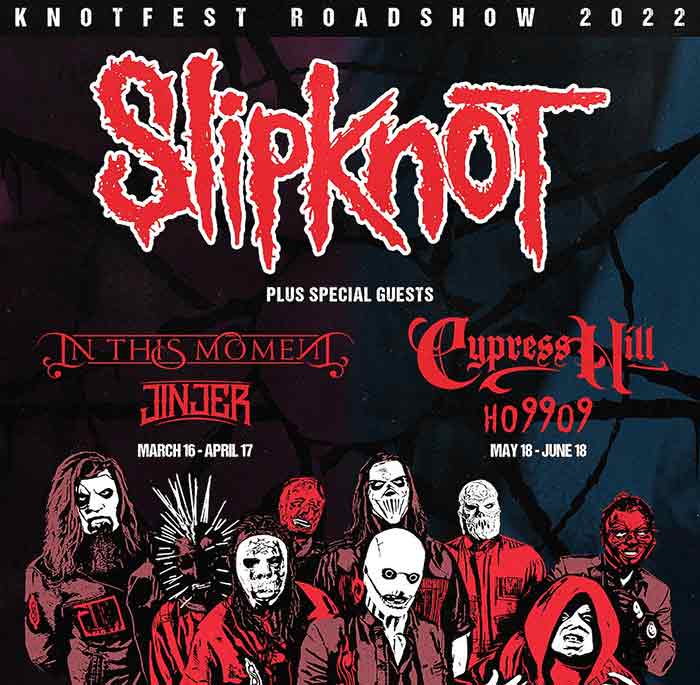 Slipknot Knotfest Roadshow Tour will take place in 2022. Get your tickets as soon as you can!

Check back to see if Slipknot extends their 2022 Knotfest Roadshow Tour by adding more dates. We know there’s not a lot of venues to choose from at the moment, but we’ll keep the above lists updated as more dates are hopefully announced.

Written and Posted by Jonathan Jackson