One of today’s most popular Latin music stars is no doubt Ozuna. If you’re a fan, prepare to get very excited! Not only has he recently released his newest album, which is named NIBIRU, he also announced the news of his upcoming 2020 Nibiru World Tour. In just the past three years, the Latin music hottie has had about seventy song titles show up somewhere on the Billboard Hot Latin Songs chart. That is a remarkable accomplishment. So far about 20 North American dates have been laid out. Cities to be visited by Ozuna’s 2020 Nibiru World Tour include Fairfax, New York, Raleigh, Uncasville, Los Angeles, Portland, Anaheim, San Jose, Fresno, San Diego, Las Vegas, Milwaukee, Laredo, Duluth, Sunrise, Orlando, El Paso and more. I’ve already seen a huge demand for him to add more cities across the country. There’s one Latin music forum online that literally has thousands and thousands of personal requests from fans posted. Hopefully Ozuna will respond by extending his tour to perform in more areas. If you get the chance to see him live, definitely do it. not only does he put on a great performance, the visual experience his show produces is just overall wonderful.

Check further down this page for a list of official Ozuna tour dates. You can also look for tickets, and listen to a great music playlist of Ozuna music videos. 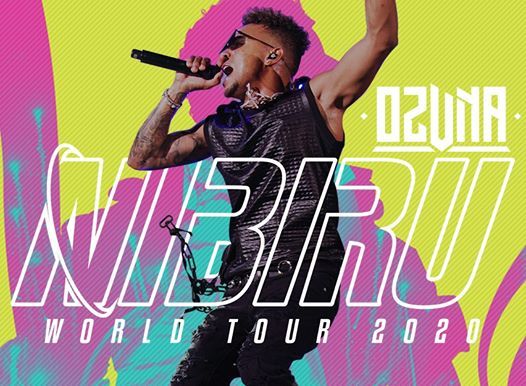 Don’t miss Ozuna’s newest album release, Nibiru. Plus, what’s even sweeter, he’s going on a 2020 Nibiru World Tour, so you can catch him live in concert.

Don’t forget to bookmark this page and check back often to see if Ozuna adds more dates to his 2020 Nibiru World Tour.

Written and Posted by Alex Escondo