The band Evanescence will be back hitting the road on tour in 2019 after spending the past two years promoting their extremely successful Synthesis Live dates. The new concerts coming this spring will find the band back in their original rock setting. A majority of the shows booked for the band come in May, with a few of the stops being festival performances. The group also has a pair of July festival appearances that they’ve announced too. Their concert tour begins May 3 when Evanescence will perform at the Welcome to Rockville festival in Jacksonville, Florida.

All tickets for the newly announced shows go on sale on Friday (February 8) at 10AM local time and can be purchased via the band’s official website, the venue’s box office, or other multiple outlets all over the internet. For those who want a grander experience, there will be limited VIP package options which gives fans a chance for a meet-and-greet, checking out sound check and being provided access to exclusive merchandising items. Singer Amy Lee stated last year that a new Evanescence album was on her “to-do” list. “We’re going to take a little bit of time, but the next thing we’re going to focus on creatively is just the next full Evanescence album. That’s the plan,” Lee told us last August, adding, “I think as a band, we’re all in a really good place with each other. I’ve been with the guys — Will, Troy and Tim — now for over a decade. Jen’s the new kid on the block but she brings a lot of positiveness and energy to the group and we’re excited for her to be with us. We’re all happy together and we make a great team and we’re excited to make more music together.”

Check below for the latest official list of Evanescence tour dates, links to look for tickets, plus some fan favorite Evanescence music videos. 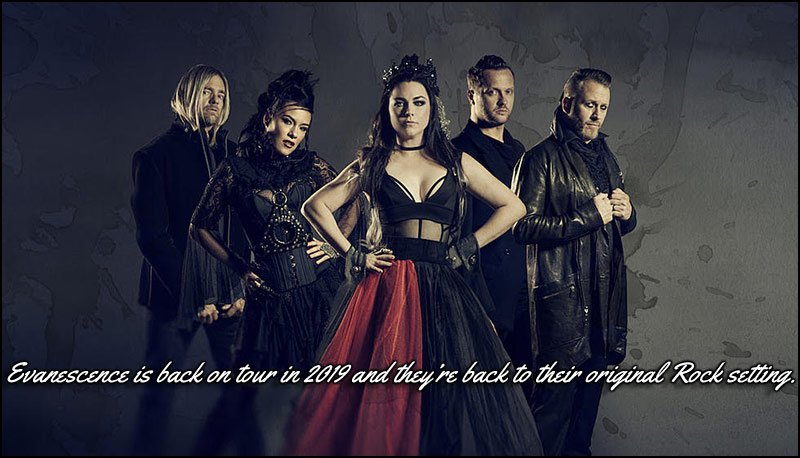 The band Evanescence announced 2019 Headline Tour with a bunch of North American concerts in May.

It’s quite possible that Evanescence will add more dates to this tour, so check back here regularly as we will update the tour list as necessary.