What was once everybody’s favorite original boy bands, NKOTB (New Kids On The Block) are now grown men but still have the same appeal. Their fans are mostly women and girls although they do have a small following of guys. What is being dubbed as their Mixtape Tour 2022 – The Party Continues, the guys of NKOTB will be performing live on stage with some very special legendary guests for this NKOTB tour including Salt -n- Peppa, Rick Astley and En Vogue. It’s an 80’s and 90’s pop-music extravaganza!! New Kids On The Block actually formed all the way back in 1984. The group consists of the following members; brothers Jordan Knight and Jonathan Knight, Joey McIntyre, Donnie Wahlberg and Danny Wood. The boys stayed together as a band from 1984 to 1994. It took then about 14 years for fans to encourage a reunion and that happened back in 2008 and they’ve been together again ever since. last time they toured it was with Backstreet Boys and the tour was hugely popular.<\span>

It’s been about time that live music has now become a thing again, people have been closed inside their houses for so long that this and all concert tours are welcome events. The 2022 NKOTB Mixtape Tour will take to the stage in quite a large number of North American cities including : San Antonio, New York, Albany, Philadelphia, Dallas, Chicago, Atlantic City, Houston, Austin, Nashville, Charlotte, Atlanta, Denver, Salt Lake City, Tampa, Seattle, San Franscisco, and many others. The tour presently consists of almost 60 shows so we don’t want to hear any excuses from fans on why they missed any.

Look below for all the latest official NKOTB tour dates, links to look for tickets, plus some fan favorite NKOTB music videos. 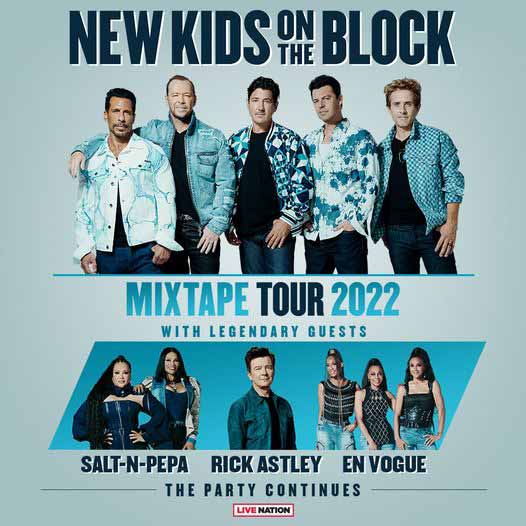 Check back to see if NKOTB adds any additional tour dates to their 2022 concert itinerary.