Everybody’s favorite funky rock group has just announced their plans for a 2023 global tour; The Red Hot Chili Peppers just made the announcement and are going to be hitting the road on tour in 2023 starting in March. The trek is only being referred to as The Global Stadium Tour and joining the Red Hot Chili Peppers will be a mix of the follow Special Guests (not all will perform on the same nights) The Strokes, Iggy Pop, The Roots, The Mars Volta, St. Vincent, City and Colour, Thundercat and King Princess. As of the writing of this, the Red Hot Chili Peppers tour 2023 is scheduled to begin on March 29th in North America when the guys take to the stage at BC Place Stadium which is located in Vancouver. After that Canadian date, the tour will continue in major cities in the U.S. including Las Vegas, Fargo, Minneapolis, Syracuse, San Diego, Phoenix, San Antonio, Houston and more. After these dates, they’ll ‘hop the pond’ over to The UK and EU. Tickets for most shows go on public sale on December 9th but there’s at least one pre-sale that we are aware of that will take place on December 6th.


Look Below for the latest list of Official RED HOT CHILI PEPPERS tour dates, links to look for tickets, and some cool videos of their newer songs, plus a huge playlist. 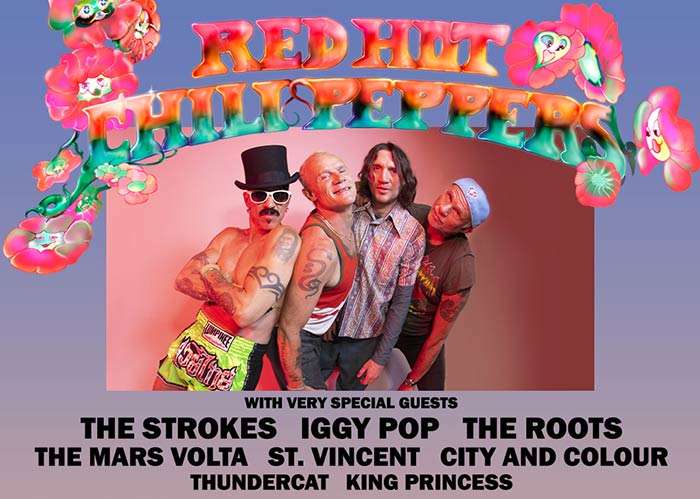 Check back often as it is expected for bands to extend their concert tours, so there’s a good chance the Red Hot Chili Peppers Tour 2023 will be expanded with more tour dates and venues.