If you happen to be a fan of Latin Music, get ready for this announcement. Superstar Enrique Iglesias is going on tour in the fall of 2021 with Ricky Martin and special guest Sebastian Yatra. The tour is scheduled to open on September 25th when the Latin studs take to the stage at GMGM Grand Garden Arena in Las Vegas, Nevada. The trek continues as they hit up major cities including El Paso, San Antonio, Houston, Dallas, Los Angeles, Philadelphia, New York, Miami, San Jose, Las Vegas, Newark, Atlanta, Orlando and more. Also included are a few shows up in Canada, in Toronto and Montreal. Even though the last studio album that Enrique Iglesias released was way back in 2014, and Ricky Martin’s most recent studio album was back in 2015, they both have a ton of songs to choose from. Ricky Martin has released 10 studio albums, and Enrique also has released 10. Like I said, plenty of songs to choose from.

Check further down on this page for the latest full list of Enrique Iglesias tour dates, and links to look for tickets. There’s also a music video playlist of some great songs by Enrique Iglesias. 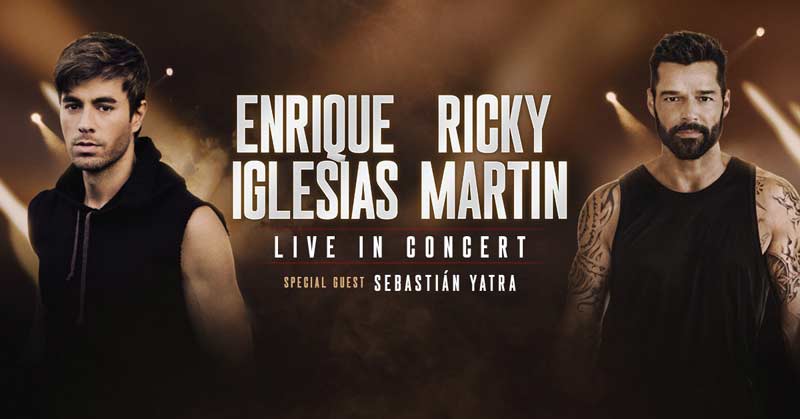 Latin music lovers are in paradise! The knockout duo of Enrique Iglesias and Ricky Martin will be on tour together this fall.

Check back often to see if Enrique Iglesias adds more dates to his present tour. We will keep the above event lists updated if and when addition tour dates are announced.

Written and Posted by Joseph Farber