The band Fall Out Boy surprised fans with their latest concert tour announcement. From late August, through mid-October, Fall Out Boy will be on the road on tour with another great band, Machine Gun Kelly. The tour will take them into such cities as Hershey, Uncasville, Uniondale, Columbia, Buffalo, Newark, Pittsburgh, Grand Rapids, Chicago, Columbus, Nashville, Orlando, Kansas City, Oklahoma City, Tucson, Austin, El Paso, Anaheim, Las Vegas, Salt Lake City, Des Moines and plenty more. The band is dubbing this the Mania Tour, and for this leg of it, they will be with Machine Gun Kelly, but there are other bands that supposedly will join them in certain venues. Supposedly in Chicago, for example, the band Rise Against will join them.

Fall Out Boy is quite a popular band, and some of their top songs are THNKS FR TH MMRS (Thanks For The Memories), Sugar We’re Going Down, Dance Dance, The Phoenix, My Songs Know What You Did in the Dark (Light Em Up), This Ain’t a Scene, It’s An Arms Race, I Don’t Care, Centuries, Grand Theft Autumn/Where Is Your Boy, Watch a Catch Donnie, Alone Together, and there’s too many more to list. If you can’t tell the songs from their titles, there is no doubt that once you hear them, you will recognize them. Fall Out Boy is considered an American Rock Band, and they stem from Chicago, Illinois. The band originated back in 2001 and was made up of Patrick Stump (Lead Singer and Rhythm Guitarist), Pete Wentz (on Bass Guitar), Joe Trohman (Lead Guitar) and Andy Hurley (drummer). During the band’s time of existence, they have brought on other members, but they regrouped in 2013 and haven’t really looked back.

Check below for all the latest Fall Out Boy tour dates, you can look for tickets, plus watch some cool music videos. 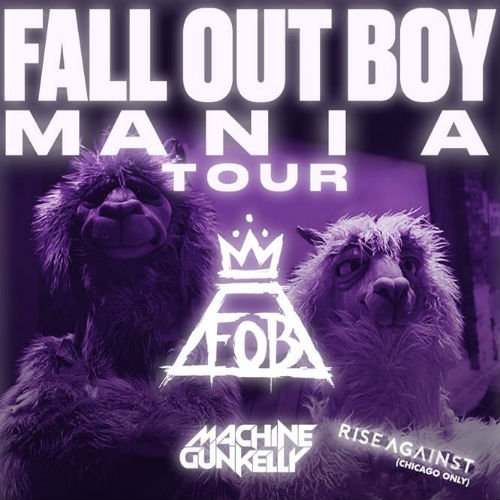 Don’t miss your chance to see Fall Out Boy live in concert! Their 2018 Mania Tour runs until the end of the year.

Check back often as it is quite common for bands to extend their tour with addition concert dates.


Fall Out Boy – HOLD ME TIGHT OR DON’T


Fall Out Boy – The Last Of The Real Ones