Metal monsters JUDAS PRIEST just announced their rescheduled 2022 tour plans and fans could not be any happier. What is being dubbed as the ‘50 Heavy Metal Years Tour‘ 2022 is due to the fact the band itself being the same age. Joining Judas Priest on the tour is the band Queensryche, who will open most of the shows. The band released a statement about the tour that said “JUDAS PRIEST are primed and ready to deliver the goods with our ‘50 Heavy Metal Years‘ anniversary celebration stage show spectacular. Performing a blistering cross section of songs from our lives in metal — we can’t wait to raise horns with you again at this once-in-a-metal-lifetime event.”. Judas Priest is already coming off of a ‘high’ of their own when their latest studio album ‘Firepower’ climbed the charts to the number 5 (five) spot on the Billboard 200. It’s the highest ranking album that Judas Priest has ever had. So far for the tour, about 25 dates have been laid out. The trek begins on March 4th when the band performs at Peoria Civic Theatre in Peoria, Illinois, and takes them through other cities including Uniondale, Philadelphia, Newark, Orlando, Charlotte, Detroit, Milwaukee, St Louis, Minneapolis, Oklahoma City, Chicago, Grand Rapids along with a good handful more. You can find the full tour list below. All I can say is that if you’ve never seen Judas Priest live in concert, you’re in for one heck of a treat. The band still sounds tight, and Rob Halford still sounds awesome.

Check further down below for the latest list of Judas Priest tour dates, links to look for tickets, plus a music video playlist of some great Judas Priest songs. 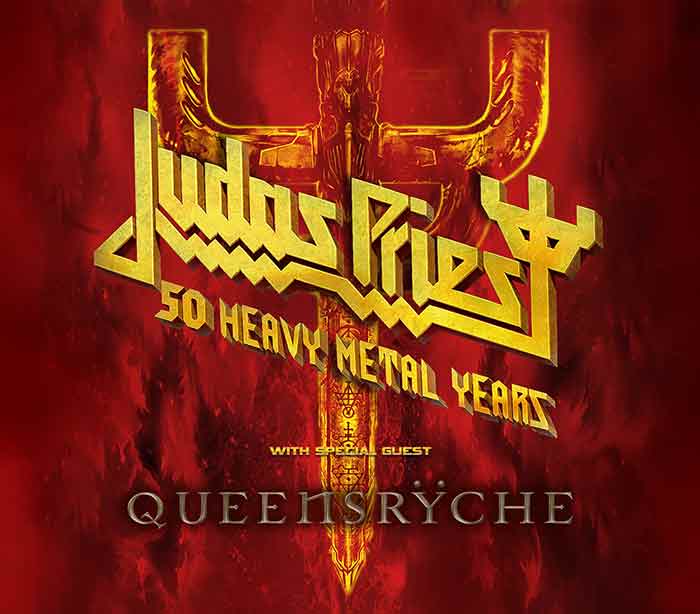 Don’t miss your chance to see Judas Priest live in concert. The above event lists will be kept updated, so if you don’t see a city near you listed, definitely keep your fingers crossed and check the lists often.

Written and Posted by Marc Prescott