One of the greatest voices existing today among jazz singers is none other than the sweet, adorable Diana Krall. The beauty is a Grammy winning, multi-platform amazing jazz singer and she has a decent sized concert tour coming up for the 2022 year. What begins on January 16th (of 2022), the Diana Krall Tour will open at the Wharton Center at Cobb Great Hall, which is located in East Lansing, Michigan. The tour has her visiting cities including San Antonio, Chicago, Atlanta, Nashville, Austin, Philadelphia, Minneapolis, Charlotte, Sarasota, Grand Rapids, West Palm Beach, Baltimore, Washington DC, Jacksonville and several more. You may recognize Diana Krall by some of her more popular hit songs such as I’m Not In Love, I’m Coming Through, I’ve Got You Under My Skin, Isn’t This A Lovely Day, Case of You, Sway, and many more. She has quite a music library under her belt, the jazz star has released 15 studio albums, along with one live album. She’s also written and performed with many very popular music icons such as Tony Bennett. Her latest studio album, This Dream Of You, was released on September 25th, 2020. A couple of years before that, she teamed up with Tony Bennett and recorded her 14th album titled Love Is Here To Stay. That album made it to the number 11 (eleven) spot on the U.S. music charts (Billboard 200).

Check down below for the latest official list of Diana Krall tour dates. You’ll also find links to look for tickets, and a playlist of some of Diana Krall’s more popular music videos. 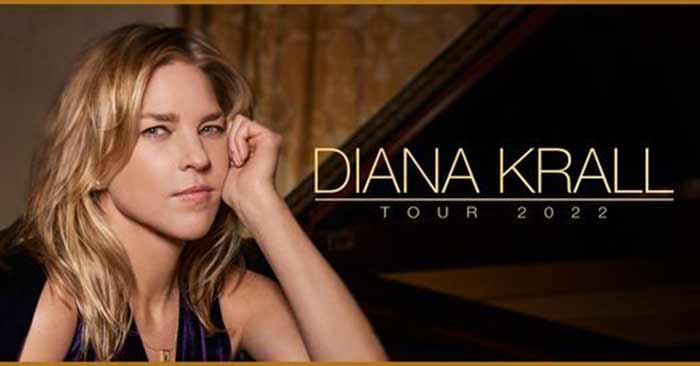 There’s a good chance that the Diana Krall Tour will be extended with additional dates. Check here often as we will keep the above event lists updated with the most recent itinerary.