There have definitely been some great concert announcements this year, but maybe none as big as this one. If you’re a fan of the classic rock group Fleetwood Mac, you certainly are in for a treat. The amazingly talented and wonderfully beautiful Stevie Nicks has just made announcement concerning a Stevie Nicks tour 2023. Yes, I know, she’s already made it known that she will be a special guest on the tour of Billy Joel, but this news is different and even better. Her own solo tour was secretly being planned, but the cat is now out of the bag. There is no official name for this Stevie Nicks tour, at least not as of the writing of this article. What we do know is that she will be performing many of her own songs, along with songs by her previous band Fleetwood Mac. I’m pretty sure all of you are familar with songs like Dreams, Gypsy, Big Love, Little Lies, The Chain, You Make Loving Fun, Sara, Say You Love Me, Rhiannon, Landslide and Go Your Own Away (of course there are plenty more). That means that these shows will be packed with some of the greatest songs from Stevie Nicks, and Fleetwood Mac. This Stevie Nicks tour 2023 will be taking place in multiple states around North America, including California, Washington, Nevada, Oklahoma, Louisiana, Alabama, Texas, North Carolina, Georgia, Florida, Pennsylvania, and more. There’s even a single stop up in Toronto, Ontario Canada. Hopefully she’ll also perform her newest song release which is a remake of the 1966 song “For What It’s Worth” which was originally written by Stephen Stills and recorded by Buffalo Springfield.


Check down below for the latest official list of Stevie Nicks tour dates. You’ll also find links to look for tickets, and a playlist of some of Stevie Nicks’ more popular music videos. 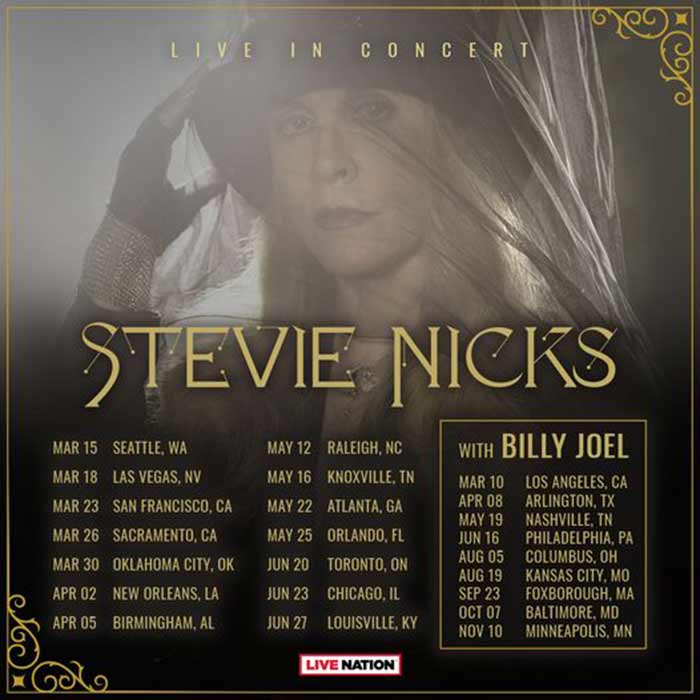 Don’t miss the Stevie Nicks tour 2023 and you won’t miss out on all of her great songs performed live by the one and only Stevie Nicks.

Don’t panic if you missed out on tickets or there’s no events listed near you. Hopefully the Stevie Nicks Tour 2023 will get extended with additional tour dates. Check back here often as we will keep all the above event lists updated.

Written and Posted by Gail Williams