Another rockin’ country music star has not let anything stop them from going out on the road and performing live in as many concerts as humanly possible. That star is Eric Church and he has a tour, The Gather Again Tour, that will carry him from 2021 deep into the 2022 year. This Eric Church tour is appropriately named The ‘Gather Again’ Tour we’re guessing at the fact that it’s been a couple of years since we’ve all really been able to ‘gather’ outside to see a live music concert. Actually the limits on all types of ‘gatherings’ was strongly prohibited in many places around the world. But live music and concerts are back and here to stay, and it looks like the Eric Church Tour is taking advantage of that. Round off 2021 with a handful of concerts, the country music star will carry himself into 2022 with his first concert of the year taking place on January 7th at the Pinnacle Bank Arena which is located in Lincoln, Nebraska. From there the tour zips from city to city, including Los Angeles, New Orleans, Portland, Boise, San Diego, Spokane, Birmingham, Green Bay, Fort Worth, Chicago, Tampa, Charlotte, Kansas City, Orlando, Hampton, Des Moines, Omaha, and way too many more to list up here, the full itinerary is listed out below in an easier way to understand it. All we know is that from the time of writing this update, to the end of his scheduled list of concert dates, Eric Church has over 45 concert appearances planned.

Check down below for the latest official list of Eric Church tour dates. You’ll also find links to look for tickets, and a playlist of some of Eric Church’s more popular music videos. Yay! 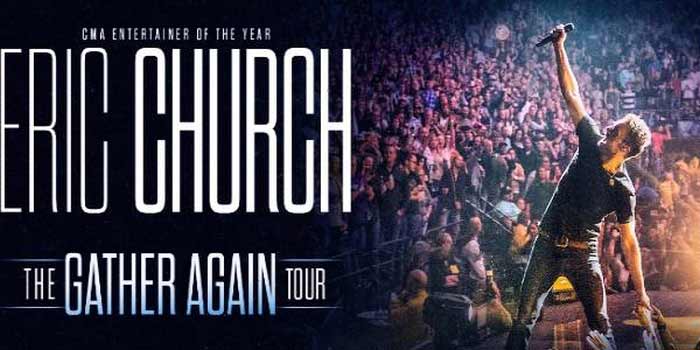 There’s a good chance that this Eric Church tour will be extended with additional concert dates. Check here often as we will keep the above event lists updated with the most recently released data.