Gabriel Iglesias, known comically as Fluffy, is an American comedian, actor, writer, producer and voice actor. An example of his comedy is the line “I drink diet Coke so I can eat regular cake” and he’s presently on his ‘One Show Fits All World Tour‘. He is known for his shows I’m Not Fat… I’m Fluffy and Hot & Fluffy. Iglesias worked for a cell phone company in Los Angeles and in 1997 went into comedy full-time, though it resulted in his being evicted from his home and losing his car. He often references his weight in his comedy, often saying, “Oh, I’m not fat, I’m fluffy”. In 2000, he appeared in season 6 of the Nickelodeon sketch comedy series All That, co-starring with Amanda Bynes and Nick Cannon.

In 2007, Iglesias voiced an entire Mexican family in “Padre de Familia”, a sixth season episode of the Fox TV animated comedy Family Guy. That same year, he began voicing a recurring set of identical twin characters on The Emperor’s New School, a Disney animated series that he describes as his favorite voice work. Iglesias was a contestant on the fourth season of reality TV series Last Comic Standing in 2006, surviving elimination to become one of the final eight comics. He was disqualified at that point for having used a smuggled BlackBerry to communicate with family and friends, which violated the rules of the show.

In 2011, Comedy Central debuted Gabriel Iglesias Presents Stand Up Revolution, a standup showcase series which Iglesias produces and hosts. Iglesias has hosted/co-hosted six episodes of Equals Three. In 2012 he played a strip club DJ and drug dealer in the 2012 film Magic Mike. Iglesias voiced Ned and Zed in the 2013 DisneyToon Studios film, Planes. He also voiced characters in the animated films The Nut Job (2014) and El Americano: The Movie (2016). Iglesias is featured in the new reality show Fluffy Breaks Even, which is currently shown on Fuse TV.

If you are ready to laugh and get your mind of your troubles then get your concert tickets to see Gabriel Iglesias now. His dates are listed below. Check out the list to see if he is coming to an arena near you. 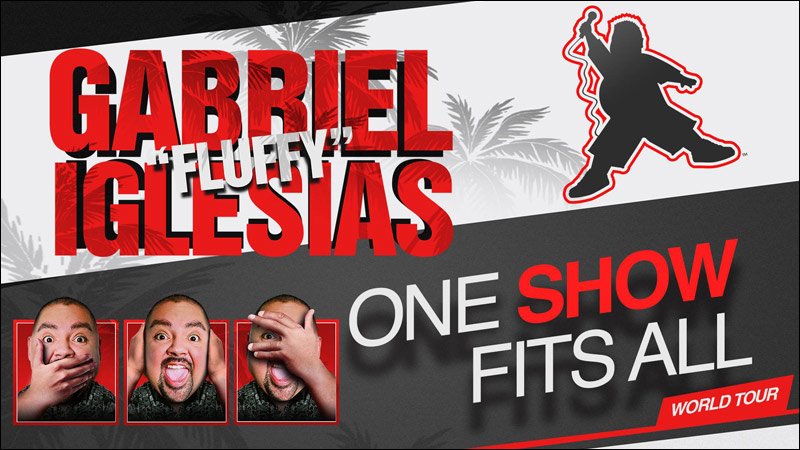 Don’t miss Gabriel Iglesias as he is on tour in North America and coming to a venue near you. His comedy shows are truly hilarious.

Remember to check back often as it is common for entertainers (and comedians) to add dates to their tours.