I really don’t think that I need to explain who Eddie Vedder is, but I will just simply say the frontman / lead singer of the band Pearl Jam. There, now that that’s out of the way, even though the band Pearl Jam has European tour dates in 2022, Eddie Vedder himself will be on a small tour in United States with the Earthlings. The Earthlings consist of members drummer Chad Smith, keyboardist/guitarist/vocalist Josh Klinghoffer, bassist Chris Chaney, guitarist/vocalist Glen Hansard, and guitarist Andrew Watt. Special guest on the mini-tour is Glen Hansard. There’s only 8 (eight) concerts listed so far as part of the Eddie Vedder the Earthlings Tour 2022 so if you plan on going to see any of the shows, I’m telling you right now that tickets will be hard to get, and expensive when you do find them. Ticketmaster is using their Verified Fan Registration system to sell tickets for these shows, according to them is cuts down on the reselling in the secondary market. Eddie Vedder and the Earthlings will only be performing in 6 different U.S. cities; New York, Newark, Chicago, San Diego, Los Angeles, and Seattle. In New York and Seattle, there’s 2 shows at each of the venues.

Check down below for the latest official list of Eddie Vedder tour dates. You’ll also find links to look for tickets, and a playlist of some of Eddie Vedder’s more popular music videos. 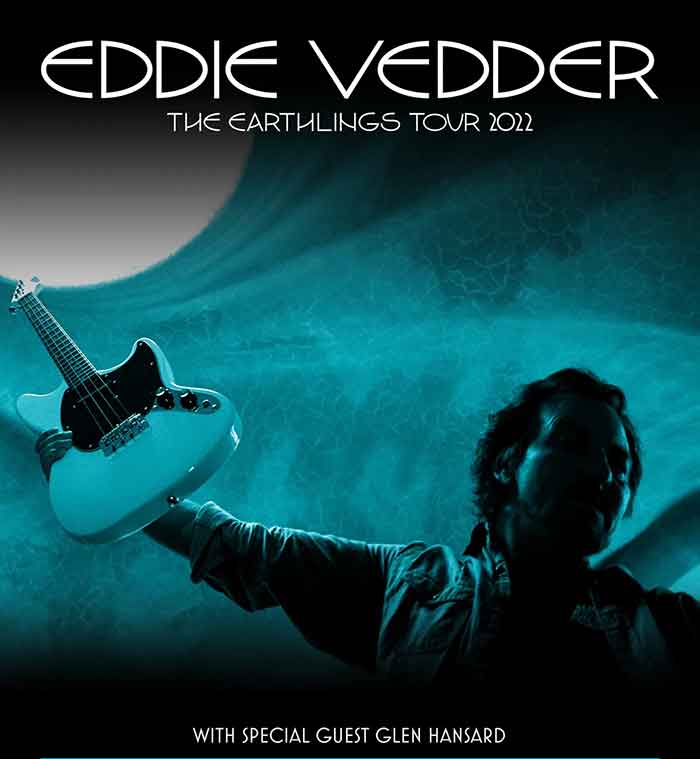 Don’t miss your chance to see Eddie Vedder on tour in 2022 with the Earthlings.

There’s a good chance that the Eddie Vedder Tour 2022 will be extended with the addition of new tour dates. Check here often as we will keep the above event lists updated.