In follow up to her debut album ‘When We All Fall Asleep. Where Do We Go?‘, nineteen year old indie-pop music sensation Billie Eilish announces her 2022 tour details. The tour is called the Happier Than Ever – The World Tour and will have Billie Eilish performing at venues in over 30 North American cities, including a couple up in Canada. If you had to categorize the music put out by Billie Eilish, we’d have to say that it falls somewhere between pop, alternative and electropop. The 2022 concert tour will have the hit performer visiting and performing in such cities as Miami, Orlando, Raleigh, Philadelphia, Los Angeles, San Francisco, Denver, Tacoma, Sacramento, Denver, Omaha, New York, Newark, Boston Washington DC, Detroit, Brooklyn, Chicago, Indianapolis, Nashville and more. There’s even several concert stops up in Canada too. To view the full tour itinerary in full detail, check down below. 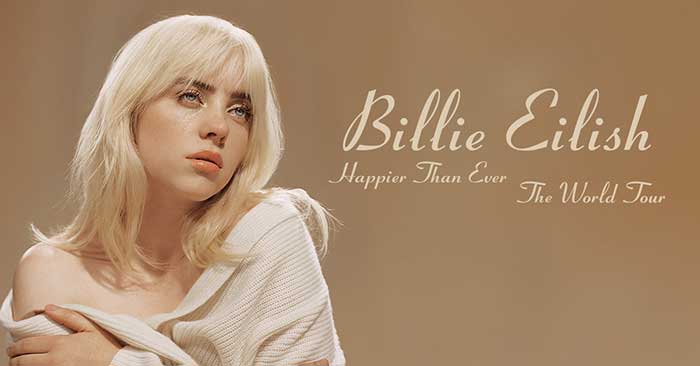 Billie Eilish prepares for her massive 2022 Happier Than Ever World Tour.

Keep checking back with the event lists above because it’s normal for entertainers and performers to extend their tour schedules without a lot of notice to fans. We’ll keep the lists updated.