It’s definitely shaping up to be a great year for concerts. One of the biggest pop music stars of all time has just announced their plans to go on tour. The amazingly talented Madonna has announced her plans for what she is calling The Celebration Tour. I really don’t think I need to explain who Madonna is, but I will give a brief background. It all began back in 1983 when her debut self titled album came out. She then went on to release the albums Like A Virgin in 1984 at True Blue in 1986. By that time, Madonna was a house-hold name, meaning that everyone around the globe knew who she was. Hit songs like Lucky Star, Borderline, Burning Up, Holiday, and Everybody made her popularity explode, and that’s just off her first album. Fast forward to today, Madonna has one of the biggest followings on social media. Her Facebook page alone has over 18 million followers and many of her music videos on YouTube have several hundred million plays each. This Madonna tour 2023 is promised to be made up of 40 years of her greatest hits, and she’s got plenty of them to choose from. So far her tour dates include major cities across North America including New York, Boston, Dallas, Los Angeles, Las Vegas, Miami, Atlanta, Seattle, Columbus and many more, including a few stops up in Canada. This looks to be one very popular tour and we expect tickets to be hard to come by. I mean, it’s Madonna and she never does anything half way. As fans ourselves, we can’t wait to see her perform live on stage again.


Check down below for the latest official list of Madonna tour dates. You’ll also find links to look for tickets, and a playlist of some of Madonna’s more popular music videos. 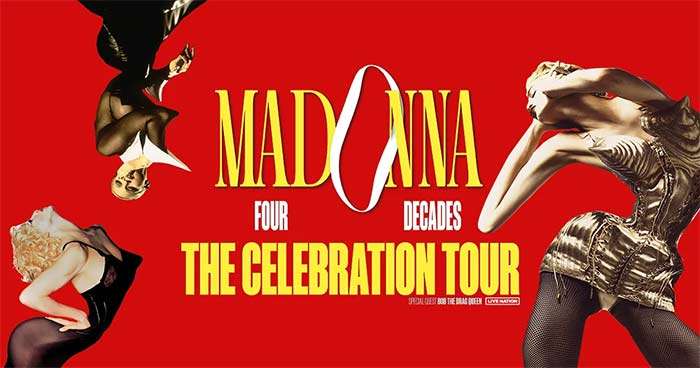 Do not miss the Madonna Tour 2023. The Celebration Tour is going to be huge.

If you missed out on tickets or there’s no events listed near you, do not worry. Hopefully the Madonna Tour 2023 will get extended with additional tour dates. Check back here often as we will keep the above event lists updated.