Rock N Roll musician Lenny Kravitz has announced more dates to his 2019 ‘Raise Vibration Tour‘ which will keep the performer quite busy from the third week of August until the middle of September. Almost 20 dates have been announced, and if you’re lucky, Lenny Kravitz will be performing at a theater near you. Even though it would be no problem for Kravitz to pack a huge arena, he’s sticking to his usual trek of mid-sized theaters. This North American leg of his tour will be visiting cities such as Philadelphia, Boston, New York, Phoenix, San Diego, Los Angeles, Nashville, St. Louis, Minneapolis, Detroit, Grand Prairie, Highland Park and more, including two stops up in Canada in Montreal and Toronto. Lenny Kravitz has many hit songs, including Fly Away, Are You Gonna Go My Way, It Aint Over Till It’s Over, Again, American Woman, Always On The Run, Mr. Cab Driver, and too many more to list. We posted a video playlist of over 180 songs below, so scroll down to listen to some awesome Lenny Kravitz tunes.

Check down below for all the latest official Lenny Kravitz tour dates, there’s also links to look for tickets, plus the music video playlist containing many Lenny Kravitz songs. 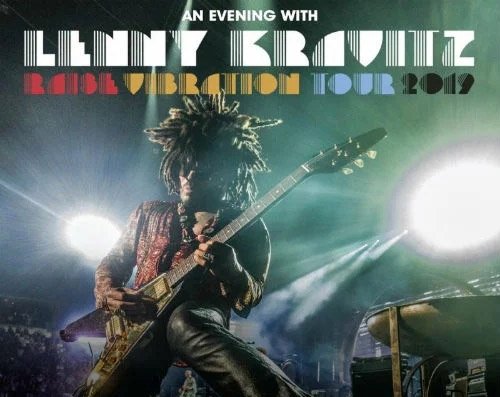 Don’t miss your chance to see Lenny Kravitz on his 2019 Raise Vibration Tour. In addition to great music and songs, Lenny Kravitz is awesome to see live in concert.

Keep checking back to see if Lenny Kravitz adds more dates to his 2019 Raise Vibration Tour. It’s common for performers to extend their tour by adding more dates without much notice to the public. We’ll keep the above event lists updated as new shows are announced.