As the world returns to ‘normal’ and people begin to emerge from the safety of their homes, there’s a need to feed and that is the need for some earth shaking metal music from the metal masters Iron Maiden. Bruce Dickinson and the boys will be back on the road in 2022 to continue on their Legacy Of The Beast Tour. This leg of the trek will have the band visiting cities that they haven’t performed in for a long while. Some of those cities include Anaheim, El Paso, Detroit, Worcester, Tampa, Belmont Park and more; As of the writing of this there’s about 25 North American Iron Maiden tour dates and that includes a handful of stops up in Canada (mainly in Ontario). Their Legacy Of The Beast shows are not new, the band’s been performing them now for 2 years but it’s been spread out due to the pandemics and hysteria. According to previous fan reviews, over two million of them have agreed that this show’s setup is is “the most extravagant and visually spectacular performance of the band’s career to date”. Since beginning this tour years ago, Iron Maiden has a new studio album named ‘Senjutsu’ and they will be performing songs from it on this road trek of theirs. Joining the band as special guests include TRIVIUM and WITHIN TEMPTATION.

Check down below for the latest official list of Iron Maiden tour dates. You’ll also find links to look for tickets, and a playlist of some of Iron Maiden’s more popular music videos. 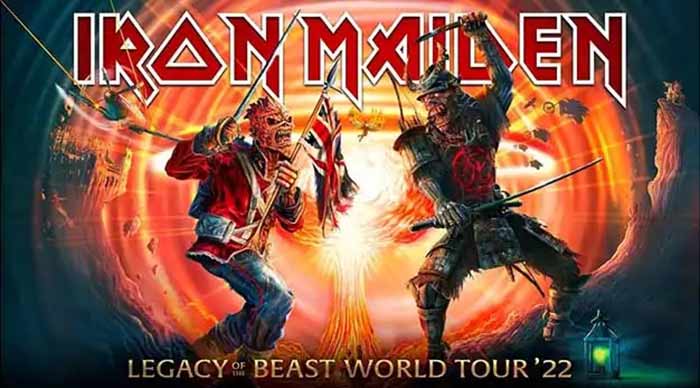 Iron Maiden continues their Legacy Of The Beast Tour in 2022.

Don’t forget that there’s definitely a good possibility that the Iron Maiden tour (Legacy of The Beast 2022) will be extended with additional North American tour dates. Check here often as we will keep the above event lists as up to date as we can.