If you’re a fan of the band My Chemical Romance, you better hold onto your seats. The news you have all been waiting for was just announced. My Chemical Romance will be on tour in North America this Fall. The 2020 MCR Tour begins on September 9th, when the band takes to the stage at Little Caesars Arena in Detroit, Michigan. From there, as of writing this, they’ll be performing in other major venues in St. Paul, Chicago, Boston, Brooklyn, Philadelphia, Atlanta, Newark, Houston, Oakland, Los Angeles, Tacoma, Dallas, Denver and several more. There’s even a date scheduled up in Toronto Ontario (Canada). The tour winds down on October 11th when they perform at T-Mobile Arena in Las Vegas, Nevada. There’s also a handful of musical festivals the band will be taking part in. You can find the full tour list for My Chemical Romance down below. Back in October of last year, the band hinted at a reunion, and actually set a ‘return show’ to take place on December 11th at the Shrine Auditorium in Los Angeles, and tickets sold out within seconds. The band hauled in a gross of over 1.5 million dollars for that one single show. That’s just a hint of how crazy all these other shows will be. The band will also be performing live shows internationally in New Zealand, Japan, Australia, and Europe.

Check down below for the latest list of official my Chemical Romance tour dates. There’s also links to look for tickets, plus a great music video playlist of some popular MCR songs. 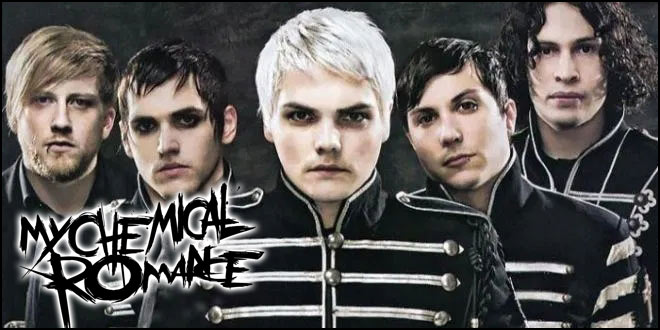 Fans have been waiting a long time for this! The band My Chemical Romance just announced a new tour with dates in North America.

The above event list for My Chemical Romance are the first announced so far. Hopefully the band will respond to the overwhelming positive response from fans, and add a whole slew more of dates. We’ll keep the event lists updated as more shows are announced.

Written and Posted by Nathaniel Bach