The 2022 year for concerts just keeps getting better. World famous crooner Michael Buble has announced his tour plans for later in the 2022 year (and hopefully 2023). The Higher Tour 2022 by Michael Buble will feature him performing at venues all across North America. The tour is scheduled to kick off on August 8th when Michael Buble is planning to take to the stage at the venue known as Gas South Arena, which is located in Duluth, Georgia. The Michael Buble Tour will continue on in North America although as of the writing of this, there are no Canadian dates set yet. The cities that will be graced with the presence of Michael Buble live on stage include Philadelphia, Pittsburgh, Los Angeles, San Diego, Detroit, Portland, Kansas City, Tulsa, San Antonio, Dallas, Phoenix, New York, Nashville, Charleston, Washington DC, and more. In total, there’s presently about 25 concerts that make up this beginning leg of the Michael Buble Tour 2022. The tour is in support of his latest studio album release named Higher. The album came out on March 22nd and climbed as high as 12th on the Billboard 200 chart.


Check down below for the latest official list of Michael Buble tour dates. You’ll also find links to look for tickets, and a playlist of some of Michael Buble’s more popular music videos. 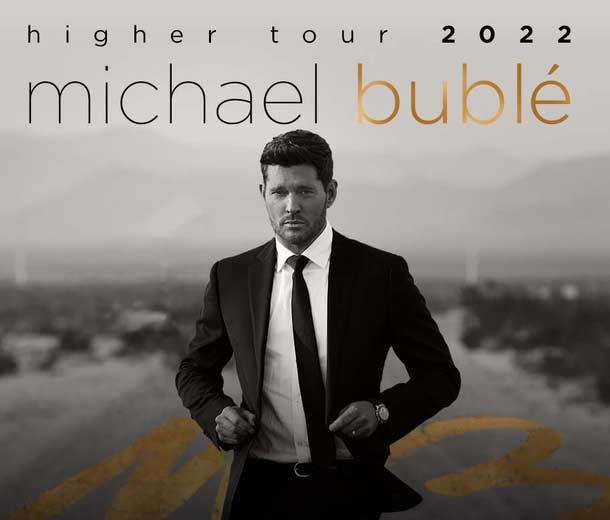 Don’t forget to catch Michael Buble on his Higher Tour in late 2022.

There’s a good chance that the Michael Buble Tour 2022 will be extended with additional tour dates so make sure to check here often as we will keep the above event lists up to date.