One of the kings of latin and salsa music is going to be on the road in 2023 on tour. Smooth singing Marc Anthony has recently announced news about his upcoming Viviendo Tour which picks back up in early in the 2023 year. There’s no doubt that Marc Anthony is one of the biggest latin music stars there is today, he has a tremendous following and just one Facebook alone he has over eighteen million followers. The Marc Anthony tour 2023 is set to begin on February 9th when he is scheduled to take to the stage at the famous venue known as Madison Square Garden which is located in New York City. From there, the tour will bring Marc Anthony to big cities such as Newark, Uncasville, Atlantic City, Chicago, Indianapolis, Sacramento, Glendale, San Francisco and San Diego. Marc Anthony was recently in the news for teaming up with Daddy Yankee to restore a sports arena which is located in San Juan. He is constantly doing charitable work and is so nice to other people. Another recent achievement of his is on YouTube, his video for the song ‘Vivir Mi Vida’ has over 1.1 billion views. He does have other videos that have hundreds of millions of views, which is just all insane and shows how massively popular and loved he is. We personally can not wait for this Marc Anthony Tour 2023 but we were also a little sad at how small the first part of his trek is, hopefully there will be more Marc Anthony tour dates released as it gets deeper into the 2023 year.


Check down below for the latest official list of Marc Anthony tour dates. You’ll also find links to look for tickets, and a playlist of some of Marc Anthony’s more popular music videos. 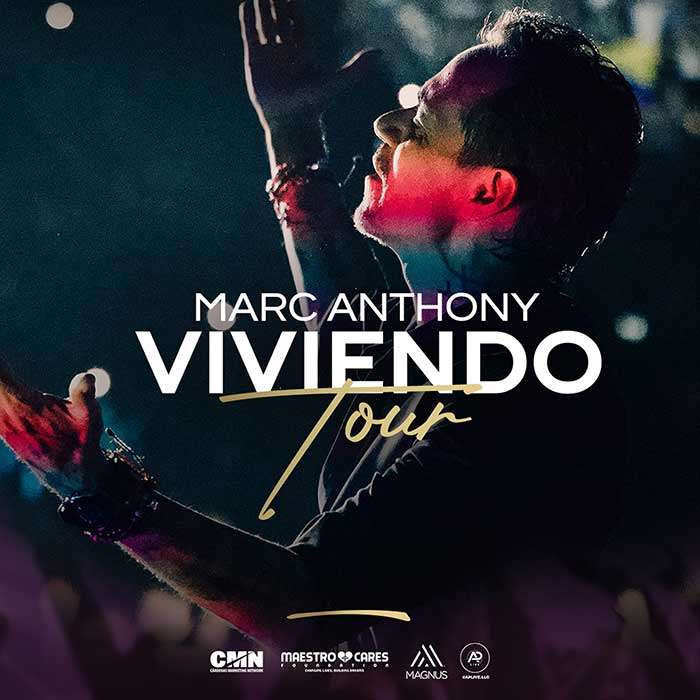 Don’t miss the Marc Anthony tour 2023, which is also know as the Viviendo Tour.

There’s a good chance that the Marc Anthony Tour 2023 will be extended with additional tour dates. Check here often as we will keep the above event lists updated with the most recent itinerary.