While you may think that summer is almost over, but it actually has about half to go and there are still a bunch of great concerts to see before the years end. THIRD EYE BLIND just announced their late 2017 plans with their ‘Fall of The Summer Gods’ Tour. The band will be performing their 1997 debut self-titled LP in its entirety to commemorate its 20th anniversary. The album was quite a force in pop rock at the time of its release, spawning the hits “Semi-Charmed Life,” “How’s It Going to Be,” and “Jumper.”. The new tour dates are set to begin on October 5 in Rhode Island and extend to mid November, with over 30 concerts currently on schedule. As of the present moment, no opening act has been specified. 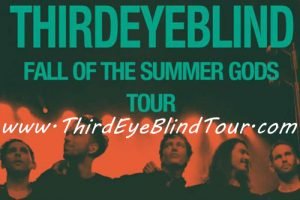 How can you get tickets? The general public on-sale for the event begins as early as August 4, 2017 at 10 AM. Before then, there will be presales for American Express and Citi cardmembers, Artist, Live Nation, LN Mobile App, Facebook, and several local venues and radio stations. The Live Nation presale offer code is CHORUS and the LN Mobile app password is COVERT. For the American Express cardmember presale you can use the promo password INGOLD, and for the Citi card presale you can use 412800, but you’ll need an AmEx or Citi card to complete your purchase. Keep in mind, each date can be different and details are subject to change. Click the links below for the show you’re interested in.

Look below for the latest list of Official Third Eye Blind Tour Dates, links to look for concert tickets, plus some cool music videos.

Check back often to see if Third Eye Blind adds any more tour dates to their schedule.