2020 Wheels of Soul Tour : This will be the 6th year in a row that the Tedeschi Trucks Band will be going on their Wheels of Soul Tour. This coming summer, the Tedeschi Trucks Band will be hitting the road on tour which begins June 26th, where their 2020 tour begins at Daily’s Place in Jacksonville, Florida. Tentatively, the tour will end on August 1st when they perform at the Red Rocks Amphitheatre Morrison, Colorado. Coming along for the ride are special guests St. Paul and the Broken Bones, with Tedeschi Trucks Band keyboardist Gabe Dixon performing as the show opener. Other cities already included on their trek include Tuscaloosa, Saratoga, Gilford, Charlotte, Philadelphia, Detroit, Atlanta, Raleigh, Indianapolis, Essex Junction and more. We’re pretty sure that more dates will be announced soon, and we know that fans want them, so we promise to keep the below event lists updated as new shows are announced. Some of the band’s more popular songs include Midnight in Harlem, Come See About Me, Calling Out To You, Learn How To Love and Bound For Glory. We’ll put a playlist of music videos below with some of these songs on it.

Check below for the latest list of official Tedeschi Trucks Band tour dates. There’s also links so you can look for tickets. Plus there’s a great music video playlist of some of the band’s more popular songs. 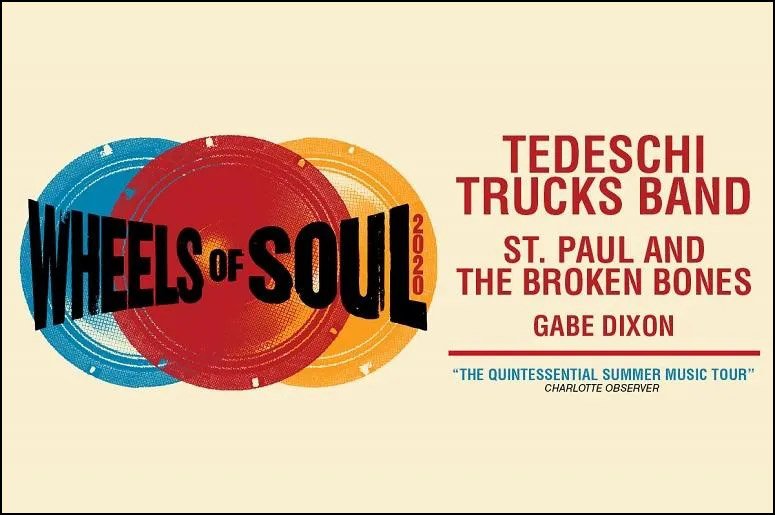 The sixth annual 2020 Wheels of Soul Tour by the Tedeschi Trucks Band will take place this summer. Don’t miss it!

As new dates are released, we will update the above event lists. If you’re lucky, Tedeschi Trucks Band will be performing at a venue near you.