Now this is big news, and I definitely did not think we would be seeing this artist back on the road so quick, but it is happening. Country Pop music diva Shania Twain will be on tour throughout the 2023 year. The concert tour is being called the Queen of Me Tour and it features super sexy Shania Twain along with special guest Priscilla Block. Presently there’s almost 40 scheduled North American shows on the list that make up the Shania Twain tour 2023 and that includes plenty of Canadian dates for her fans way up North. The Shania Twain tour kicks off on April 28th when the country music star is scheduled to hit the stage at the venue known as Spokane Arena which is located in Spokane, Washington. After that, shows will continue to take place in major cities including Saint Paul, Kansas City, Dallas, New York, Chicago (Tinley Park), Syracuse, Boston (Mansfield) Cuyahoga Falls, Charlotte, Columbia, and more. Canadian cities include Toronto, Quebec, Montreal, Halifax, Moncton, Calgary, Edmonton, Vancouver and Saskatoon. Considering the size of Shania Twain’s fan base, concert tickets will be in demand so get them early.


Check down below for the latest official list of Shania Twain tour dates. You’ll also find links to look for tickets, and a playlist of some of Shania Twain’s more popular music videos. 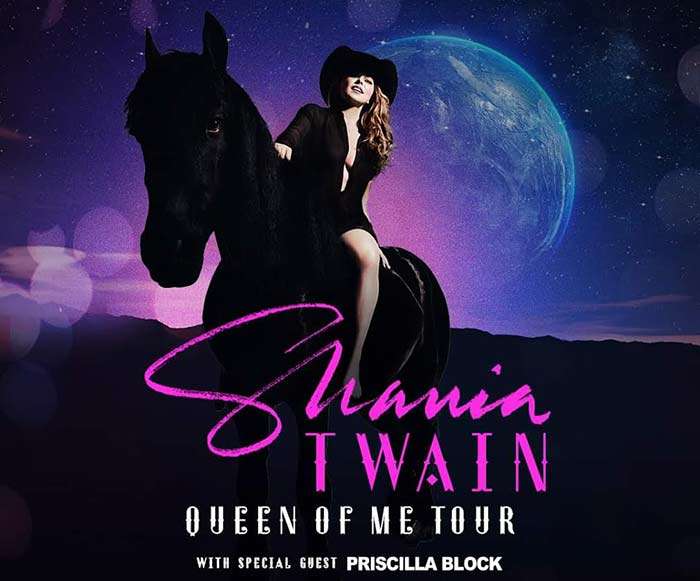 Don’t miss the amazing Shania Twain on her 2023 Queen of Me Tour.

Hold on because there may be more shows coming. It is quite common for performers to only announce part of their tour plans at first. There’s always a very good chance that the Shania Twain Tour 2023 will be extended with additional tour dates. Check back here often as we will keep the above event lists updated.