The 2022 concert scene just got a whole lot hotter! The Ana Gabriel Tour 2022 has just been announced, being dubbed as ‘Ana Gabriel La Luna de America : Por Amor A Ustedes World Tour’ (whew, that was a mouthful). Ana Gabriel is a huge Mexican music icon who is tremendously famous in the genres of Latin pop music, Latin Rock, and Mariachi. Ana Gabriel is from Mexico and has been in the music business since 1974. She began her music career very early in her life, in fact she was only 6 years old when she first took to the stage when she sang “Regalo A Dios” by José Alfredo Jiménez. Throughout her long career in music, she’s released over 20 studio albums, 3 live albums, and 19 compilation albums. She was nominated for a Grammy Award back in 1991 for best Latin Pop Performance (Quien Como Tu), and she’s also been nominated multiple times for the Latin Grammy Awards back in 2005, 2006 and 2008. The Lo Nuestro Awards are given out annually by the television network Univision in the United States and Ana Gabriel has received thirteen awards from twenty-nine nominations. Fans of hers that live in the United States should be excited because she’s just announced a good number of tour dates that she plans to perform at. Yay!

Check down below for the latest official list of Ana Gabriel tour dates. You’ll also find links to look for tickets, and a playlist of some of Ana Gabriel’s more popular music videos. 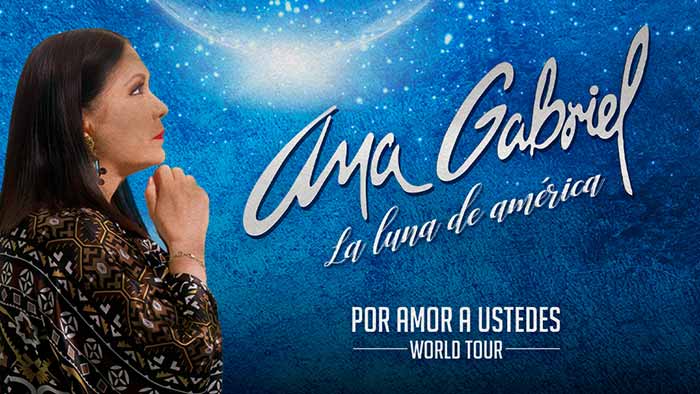 Don’t worry, there’s a good chance that the Ana Gabriel tour will be extended with additional show dates. Check here often as we will keep the above event lists updated with the most recent schedule.