While it’s certainly still early this 2023 year, some great concert tours are presently on their way to a venue near you. Fans of heavy metal music just got significantly good news, since the band Disturbed has finally released tour plans. Also joining Disturbed during their Take Back Your Life Tour are Breaking Benjamin as well as Jinjer. Tour dates for Disturbed tour 2023 don’t begin until late spring, and basically continue through summer, presently ending early September. Additionally, the band recently released their latest album Divisive and furthermore has been altogether well received. Obviously they will play their ‘classics’ and also some of new material. In fact as I type, I’m simultaneously listening to ‘Bad Man’ which is evidently from their latest record. At least 35 tour dates have been confirmed in North America, that subsequently includes a handful in Canada. We emphatically await this Disturbed Tour to start.

Who is the band Disturbed

Albeit the band Disturbed has been around since 1994, overall that’s over 25 years, it’s undoubtedly true that you’ve indeed heard some of their popular songs. In fact, some of their older songs are especially well known. Unless you’ve lived in cave for the past 30 years, you’ve undeniably heard tracks such as Down With The Sickness, their covers of The Sound of Silence and Land Of Confusion, in addition to Stupify, Prayer and Indestructible. Not surprisingly, the band has sold in excess of 17 million records, and is comparatively like other great metal bands, specifically Slipknot and Godsmack. Disturbed is unquestionably one of the most successful metal bands of the 21st century. E.g. on Facebook they have over 10 million followers. Secondly, on YouTube their music video for Down With The Sickness correspondingly has almost 200 million views.

The Disturbed Tour Itself

Look further below for all the latest official Disturbed tour dates, links to look for tickets, not to mention some surely fan favorite Disturbed music videos. 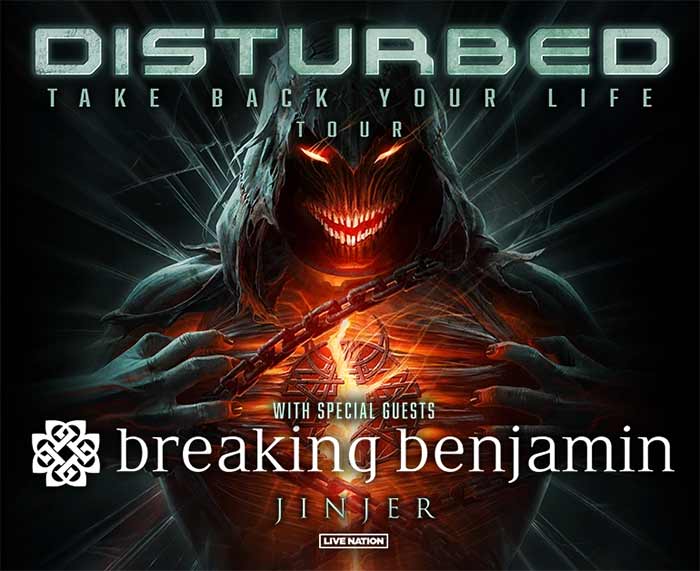 Get ready because the Disturbed Tour 2023 is headed your way.

Check back to see if the Disturbed tour 2023 adds any further tour dates. It’s generally common for performers to, at first, not release their entire tour plans straightaway.