Winter 2022 just got a bit warmer. Kacey Musgraves just announced her tour plans for early 2022, and so far about 15 lucky venues across North America will be visited by the musical queen. In support of her latest album Star-Crossed, the tour is being called the Star-Crossed: Unveiled tour and it’s set to take off this coming January through February. So far we’ve heard 2 (two) songs from her newest album. One titled the same as the album, and the other was ‘Justified’, and we really like both. Touring with her are two special guests, King Princess and Muna. Musgraves’ music is mainly categorized as country, but some of her songs definitely fall into other genres such as pop and folk. She’s been active in the music industry since 2009 and is known for popular songs such as Space Cowboy, Follow Your Arrow, Merry Go Round, Mama’s Broken Heart, Biscuits and many more. While her tour presently is not that large, it does include major cities including Boston, Denver, Los Angeles, Philadelphia, Kansas City, Chicago, New York, Cleveland, Washington (DC), Atlanta, Nashville and even a stop up in Canada in Toronto. 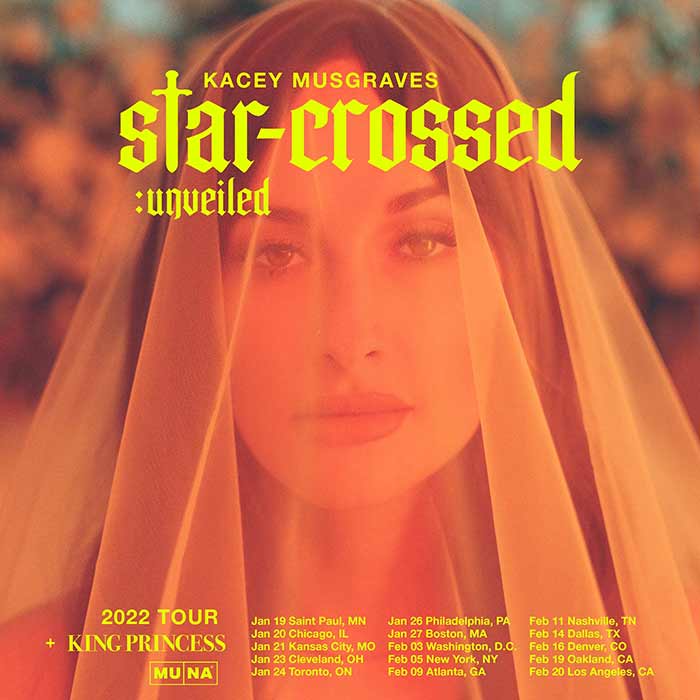 Don’t miss Kacey Musgraves when she’s on tour in 2022!

There’s a good chance that this Kacey Musgraves tour will be extended with more concert dates. Check here often as we will keep the above event lists updated with the most recent itinerary.