It’s been about 10 years but it’s finally happening. The members of the band Blink-182 are reuniting; Mark Hoppus, Tom DeLonge and Travis Barker will be together again and performing live on stage for their 2023 concert tour. The band is also releasing a new album, which one of the songs (‘Edging’) is being released as a single on October 14th. It’s been a solid 10 years since the trio have been in a studio together. This Blink-182 Tour 2023 is planned to roll on through North America in addition to New Zealand, Europe, and Australia. The band will also be performing at several music festivals that take place in Latin America. Joining Blink-182 as special guests is Turnstile. The tour begins on May 4th when the band takes to the stage at the venue known as Xcel Energy Center which is located in Saint Paul, Minnesota. The trek continues on as it hits up other major cities such as Chicago, Detroit, Cleveland, New York, Washington DC, Brooklyn, Pittsburgh, Baltimore, Phoenix, Hershey, Boston, Los Angeles, San Diego, Phoenix and more including several stops in Canada; Toronto, Calgary, Vancouver, Edmonton and Montreal.


Check down below for the latest official list of Blink-182 tour dates. You’ll also find links to look for tickets, and a playlist of some of Blink-182’s more popular music videos. 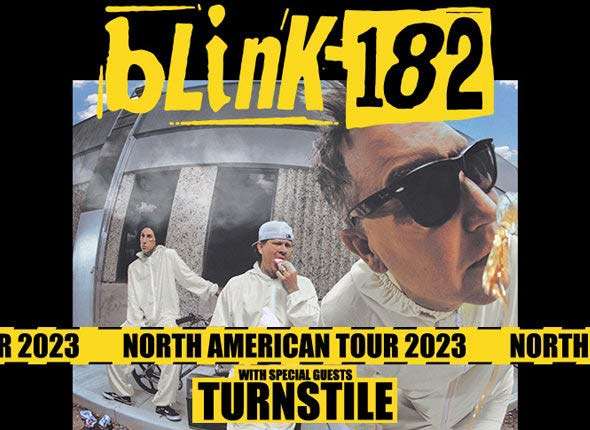 There’s always a possibility that this Blink-182 Tour 2023 will be extended with additional tour dates. Check back here often as we will keep the above event lists updated.