When I was growing up, one of the first rock bands I was turned onto was a group named Foreigner. Their music was remarkable and quite unique. Their lead singer at the time, Lou Gramm, had this incredible voice that was all his own (meaning that he did not sound like any other rock start that was around). Gramm stayed with the band from 1977 to 1990, and then again from 1992 to 2003. During that time, the band cranked out hit song after hit song. There’s no doubt you’re heard their more popular songs such as Double Vision, Head Games, Blue Morning Blue Day, Feels Like The First Time, Urgent, Cold As Ice, Waiting For A Girl Like You, Hot Blooded, I Want To Know What Love Is, and Juke Box Hero (just to name a few). Fronting the band now is another very talented singer named Kelly Hansen, who has a voice very similar to Lou Gramm’s. Their concerts are great to see live, mostly due to the fact that they play hit song after hit song. This Foreigner Tour 2023, also being called The Historic Farewell Tour, is not one to miss if your a fan of classic rock. Joining Foreigner on their 2023 tour will be the 80’s band Loverboy.


Check down below for the latest official list of Foreigner tour dates. You’ll also find links to look for tickets, and a playlist of some of Foreigner’s more popular music videos. 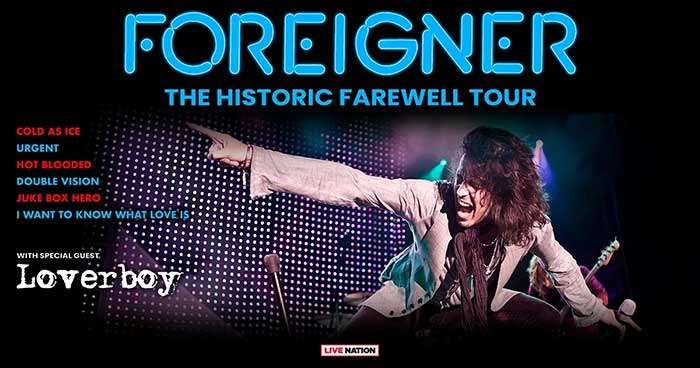 Don’t miss Foreigner and Loverboy on The Historic Farewell Tour 2023.

There’s always a possibility that the Foreigner Tour 2023 will have additional tour dates tacked on. Check back here often as we will keep the above event lists updated.