Let me start off by saying that I am a little biased when it comes to writing about this next heavy metal superstar because I’m such a huge fan. It also goes without saying that there’s additionally millions of other people that feel the same way I do about Rob Zombie. Besides being a incredible movie director, film maker and voice actor, he’s certainly one of the best singers and songwriters in his genre of music. His songs and music are heavy in addition to remaining tight. His lyrics and live concerts are almost always horror themed (just like his movies), and in addition he puts on an amazing live show. While he began as the founder and frontman for the band White Zombie, Rob has undoubtedly taken his solo career to the next level.

With all that being said, at this time here’s the news we’ve all been waiting for this year. The Rob Zombie tour 2023 has been announced, and surprisingly there’s another rocking superstar joining him on tour. Alice Cooper coupled with special guests Ministry and Filter is going to make these performances undeniably legendary. Rob Zombie himself has enough hit songs to fill the entire show, and together with Alice Cooper who has even more (which is understandable considering how long Cooper has been in the industry). This Rob Zombie tour will certainly have us hearing our favorite Zombie songs including Dragula, Never Gonna Stop (The Red, Red Kroovy), Living Dead Girl and Scum of the Earth. From Cooper we hope to hear I’m Eighteen, School’s Out, No More Mr Nice Guy, in addition to Welcome to My Nightmare. The tour is evidently being dubbed as ‘Freaks On Parade’.


Lastly, Look below for all the latest official Rob Zombie tour dates, links to look for tickets, not to mention some fan favorite Rob Zombie music videos. 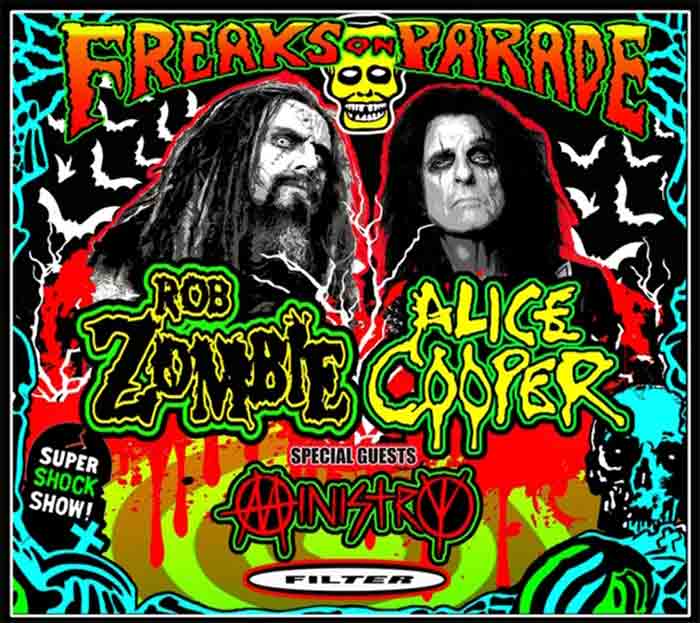 Check back to see if the Rob Zombie tour 2023 adds any additional tour dates. Generally performers release their tour plans little by little.