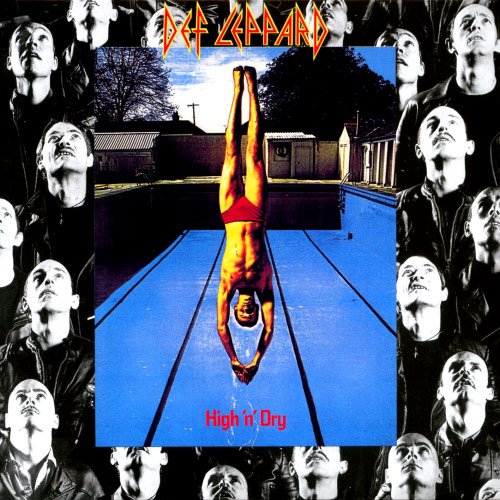 I have to just say something right of the bat here, this album has been one of my favorite all time records of all time. Not one single bad song on the entire album. The album producer was the one and only Mutt Lange, and the year was 1981. It took from March until June of that year for the album to be completed in the studio and released. High ‘N’ Dry is the 2nd studio album released by Def Leppard. The exact date was July 11, 1981. The album reached spot number 38 on the Billboard 200 (US) list. The title song (same name as the album; High ‘N’ Dry) made it to the 33 spot on VH1’s 40 Greatest Metal Songs list. The track list of songs include the following song titles; Let It Go, Another Hit And Run, High ‘N’ Dry (Saturday Night), Bringin’ On The Heartbreak, Switch 625, You Got Me Runnin’, Lady Strange, On Through The Night, Mirror Mirror (Look Into My Eyes) and No No No. A later re-release of the album included 2 additional songs that were re-mixes of the songs Bringin’ On The Heartbreak and Me & My Wine. One thing to note is that Phil Collen was not part of the band yet when they went into the studio to record the album. He was, however, put into the album’s videos. Check below for videos of some of the songs from Def Leppard’s album High ‘N’ Dry.


Def Leppard – Bringin’ On The Heartbreak