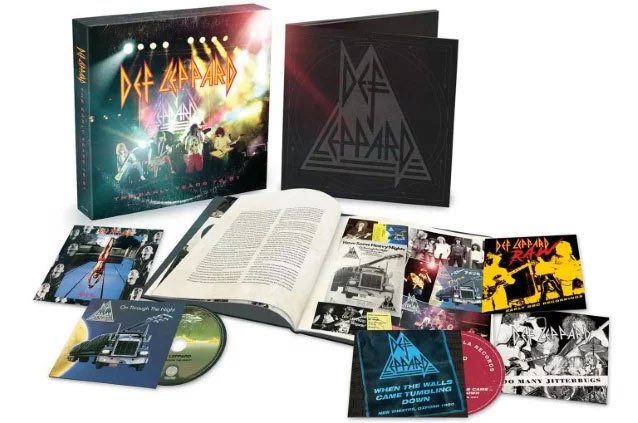 I first was turned on to the band Def Leppard in the very early 80’s. I don’t remember the exact circumstance, but 2 albums (yes, vinyl) landed in my lap which definitely affected me in a positive way. I was instantly turned on to ‘rock music’. The two albums were both by the same band, Def Leppard. The titles of the two albums, On Through The Night and High N Dry. Needless to say that led me to Pyromania, but that’s a different story in itself. Between both of those first two records, I was hooked on this band. On Through The Night was Def Leppard’s debut album, and it definitely rocked me in a good way. The album was released on March 14th, 1980 and the track list consisted of the songs Rock Brigade, Hello America, Sorrow Is a Woman, It Could Be you, Satellite, When The Walls Came Tumbling Down, Wasted, Rocks Off, It Don’t Matter, Answer The the Master and Overture. The band’s lineup was a bit different then too. Joe Elliot on vocals, Steve Clark on lead guitar, Pete Willis on both lead and rhythm guitar, Rick Savage on Bass, and Rick Allen on drums. The record peaked in the UK at the number 15 spot of the ‘UK Albums Chart’, and at number 51 on the USA Billboard 200 list. The band’s second full studio album was titled High N Dry, and to me it was even better than their first. The music got tighter, yet was still loud and rocking. High N Dry was released on July 11th, 1981 in the US; in the UK it was released 5 days earlier on the 6th. The track list was made up of the songs Let It Go, Another Hit and Run, High N’ Dry (Saturday Night), Bringin’ On The Heartbreak, Switch 625, Your Got Me Runnin’, Lady Strange, On Through The Night, Mirror Mirror (Look Into My Eyes) and No No No.

Fast forward to now, 2020, and on March 20th the band is releasing a new box set called ‘The Early Years 79-81‘. The set will represent the above mentioned first two albums by Def Leppard; On Through The Night and High N Dry. This box set comes with a total of 5 (five) CDs which includes both original albums (remastered of course), all the B-sides, all re-mix versions, rarities, ‘Radio One’ Sessions, “Live From Reading Festival” (which took place in 1980) and a very rare find of their first ever appearance from a show in Oxford, also which took place back in 1980. When asked about the release of this box set, singer Joe Elliot said “Well, the fans asked, and we listened! Really excited to have our early years reworked with a load of rare material including the newly unearthed ‘Live At The Oxford New Theatre’, recorded on the 1980 U.K. tour …. It’s been a trip putting this box-set together and I hope you all enjoy listening to it as much as we did working on it!”

Def Leppard releases box set of their Early Years 1979 – 1981. The set will be available to the public on March 20th.

Written and Posted by Ellen Stanner