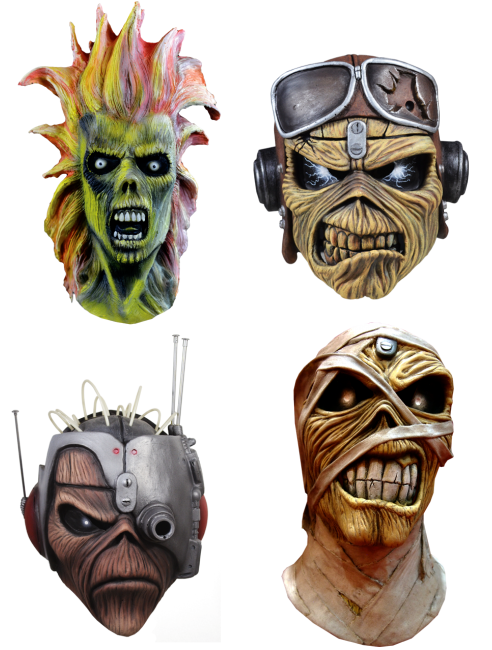 If you’re a fan of metal band Iron Maiden, you should be psyched for this year’s Halloween as the band just released 4 new Halloween Eddie masks to the public. The news is out now, but you’ll have to wait until the holiday is a bit closer before you can actually get your hands on one. In conjunction with the company Trick or Treat Studios, Iron Maiden will now have a larger line of their mascot Eddie masks (and costumes). You can actually place a pre-order right now; The new masks include ‘Somewhere In Time’, ‘Aces High’, ‘The Number of The Beast’ and ‘The Final Frontier’. Actual shipping of the masks wont be until late August or September, but at least you can secure yours now. Previously released Iron Masks include ‘Piece of Mind’, ‘Eddie’, ‘Killers’ , ‘The Book of Souls’, the pharaoh from ‘Powerslave’ and the mummy from World Slavery Tour.

Check out some of the mask pictures below, or you can also see the full complete line of masks and costumes at the main site of Trick Or Treat Studios where you can order them too.

Check out some of the wicked cool Iron Maiden / Eddie Masks made by Trick or Treat Studios.