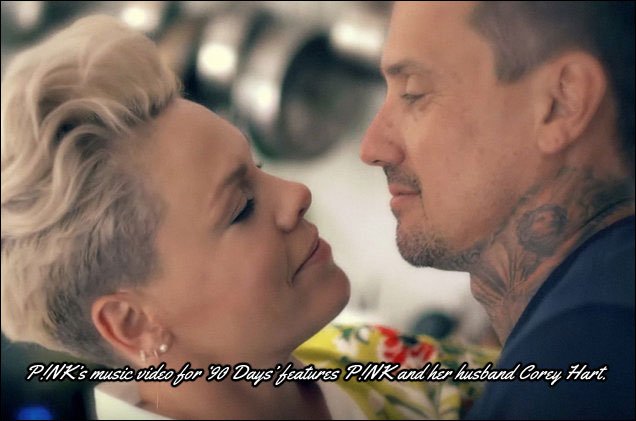 P!NK just released a moving new music video for her song “90 Days“, a track off her newest studio album ‘Hurts 2B Human‘. Featured in the musical part of the song is singer/songwriter Wrabel but he is not present in the video, although the video does feature her husband Carey Hart. The video starts with a video clip of P!NK on the talk show Ellen, where she talks about her kids, Willow and Jameson. Then the video switches between shots of P!NK and Carey Hart together in a beautiful radiant home, then to the pop singer alone in her bathtub with her eyeliner smeared. Remi Bakkar, who is one of P!NK’s dancers, directed the new video. The video was filmed while P!NK was on tour in Portland, Oregon, and Detroit, Michigan. “It’s shot just for fun, just because we wanted to, and I hope you love it,” P!NK said in an Instagram video. The singer also mentioned that “90 Days” is one of her favorite songs on Hurts 2B Human, which debuted at No. 1 on the Billboard 200 chart last month. You can find the video to watch below in this article post., so check it out and make sure your volume is turned on.

P!NK’s new music video for her song 90 Days features her and her husband Carey Hart. Watch the video below.