Joe Elliot of Def Leppard joins Billy Joel to Perform ‘Pour Some Sugar On Me’. Watch This! 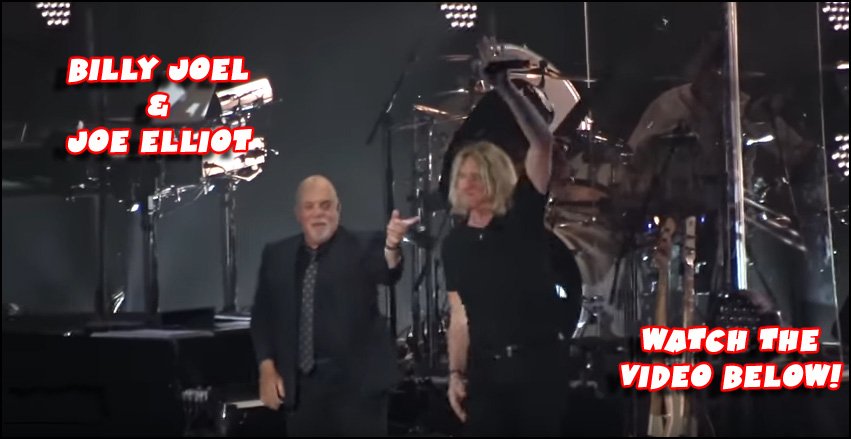 Joe Elliot, the lead singer / frontman of the rock band DEF LEPPARD, joined legendary singer & songwriter Billy Joel on stage the other night (Friday, August 10th) at Fenway Park in the great city of Boston, Massachusetts, to perform Def Leppard’s hugely popular song “Pour Some Sugar On Me“. A great Fan-filmed video footage of Joe Elliot’s appearance with Billy Joel can be seen below.

DEF LEPPARD and JOURNEY recently played at Fenway Park as part of their huge North American tour. The trek, which began back in May in Hartford Connecticut, will run through October 6th, when it ends at the popular venue the Forum in Los Angeles.

During an interview back in 2015 with SPIN, Joe Elliott talked about DEF LEPPARD’s influence on contemporary pop music. He said: “I notice when it’s pointed out to me, because I honestly don’t listen to much pop radio. But when I am made aware of it, or just happen to be listening to whatever radio station my friend is tuned to in their car, it’s, like, ‘Whoa, that sounds a bit like we could’ve done it.’ I started becoming aware of our influence in pop music about 15 years ago when Pink did a radio show with us, and she was standing on the side of the stage singing every word. I was like, well okay, she’s a fan. [Laughs] We have people like Jewel or John Mayer or the guys in MAROON 5, all of whom are huge fans. It wasn’t just RATT and POISON we were a part of…. [now] all of a sudden you’ve got Lady Gaga coming out and saying, ‘I fucking love DEF LEPPARD,’ and we had Taylor Swift wanting to work with us six or seven years ago when she was first kicking off.”

He went on : “You are aware of it, and it’s flattering, but I think it’s down to the fact that we’ve always been more pop than metal, much to the annoyance of the metal press and metal fans. We were never DIO or ANTHRAX or JUDAS PRIEST… We’ve always been about [blending] that kind of quirkiness that QUEEN had with the power of AC/DC. It’s something we’ve always felt was kind of our blueprint. So I absolutely hear it in pop because that’s essentially who we were. DEF LEPPARD became popular not through being a rock band like [LED] ZEPPELIN or [BLACK] SABBATH. We became popular because our singles were on ‘American Bandstand’ between KOOL & THE GANG and Michael Jackson. We were the white rock band from the U.K. that people were like, ‘What? How did they infiltrate the Top Ten?’ And it was because we had these infectious melodies. We weren’t afraid of singing about relationships or love, which is something that metal would never do. We were never [singing about] dungeons and dragons. We never will be.”

Check out the video below to watch Joe Elliot make a special appearance at a recent Billy Joel concert to perform Pour Some Sugar On Me.


VIDEO: Joe Elliot of Def Leppard makes appearance at Billy Joel concert to perform Pour Some Sugar On Me :