Are you ready for the following concert statement? It’s a big one. This time we are proud to announce that Ed Sheeran will be going on tour in 2023, and it’s been quite some time if I am not mistaken. The last time Ed Sheeran took off on a tour was about 6 years ago, but wait no further because starting in May of 2023, Ed Sheeran will be on tour in North America. What is being called “The + – = ÷ x Tour” (or simply pronounced “The Mathematics Tour”) is the coming Ed Sheeran Tour 2023. Tagging along as special guests include Khalid, Russ, Dylan, Rosa Linn, Cat Burns and Maisie Peters. Not all guests are performing on the same night. On May 6th, the Ed Sheeran tour begins at the venue known as AT&T Stadium which is located in Arlington, Texas. The trek then hits up other big cities including Houston, Tampa, Philadelphia, East Rutherford, Atlanta, Pittsburgh, Seattle, Detroit, Las Vegas, Denver, Minneapolis along with others. There’s also a couple of stops planned for Canada in Vancouver and Toronto. To help make sure that tickets end up in the hands of fans and not resellers, the present Ed Sheeran tour will use a system known as ‘Verified Fan’ where they try to enforce that the original purchaser of the tickets is who actually attends the show.


Check down below for the latest official list of Ed Sheeran tour dates. You’ll also find links to look for tickets, and a playlist of some of Ed Sheeran’s more popular music videos. 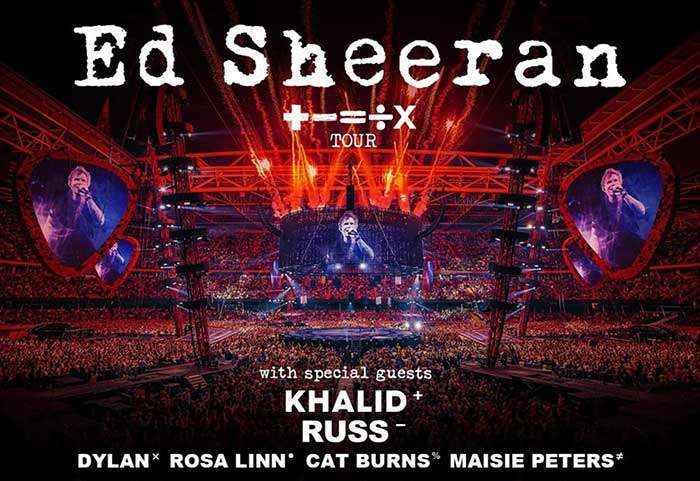 You’ve heard correctly, Ed Sheeran will be on tour in 2023 so don’t miss it

Keep an eye out because there’s a good chance that the Ed Sheeran tour 2023 will be extended with additional tour dates. Check here often as we will keep the above event lists updated.